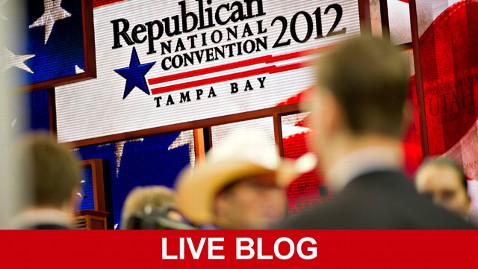 Everybody’s hoping that Clint Eastwood will be the surprise guest. The GOP usually likes to say that Hollywood should shut up about politics and stick to entertainment. But in Clint’s case it’s different.

I like the band that’s playing in the breaks during the RNC. They look as old as The Rockme Foundation. You don’t get to hear them in the clear too often, but they sound like a very competent cover band, especially adept at blues and R & B. (Which I’d never associate with Romney.)

Oh, no!  It’s another emotional Mitt video with more Ann Romney. Plus darling home videos. Mitt loves Ann. I love my wife, too. Maybe I should be President of the United States!

I think Mitt Romney comes off much better in these video packages than he does in person. He looks the part, he’s got a great smile – and there’s a warmth that’s manufactured and underscored.

Clint Eastwood is about to speak. His delivery reminds me of old Jimmy Stewart. You gotta love Clint. He seems to be fumbling a bit, rambling, and disconnected. It’s part Jimmy Stewart, part Admiral James Stockdale. This is the second vaudeville routine of the night, but more entertaining than the Newt & Calista Show.

My wife Victoria notes that the GOP has just given Obama and the Democrats the grand opportunity to call upon any Hollywood star they want (Clooney, Pit, Matt Damon, etc.) and the Republicans can’t criticize them for showcasing a Hollywood star.

(We’ve all played that game.)

So, Marco Polo (sorry, Rubio) touts the same discredited policies that led to huge deficits under Reagan and turned a surplus into a deficit under George W – and that led to the Great Economic Collapse of 2008. Of course, Marco’s too young to know all this.

And now some blah blah blah about the Creator. Pandering to God. The last refuge of a scoundrel.

Nothing new and dramatic in Rubio’s speech. (I am enjoying my steak, however. It was rubbed with the “Chicago Back of the Yards” spice mix we bought in Evanston.) Oh, what did Marco Polo just say?

Right about now, my wife Victoria adds that Obama and the Democrats will have the last word.

Mitt Romney jumps his cue – and blows his entrance! He’s walking past a sea of white faces, shaking dozens of white hands, giving awkward hugs all around.

“This will be a disaster for him,” my wife announces. My wife is always right. But, let’s see…

I’m just going to sit back for the next half hour and let the Mitt magic wash over me.

20 minutes in and Mitt’s doing a good job. If you forget that his party’s policies created this economic disaster, you might actually think he’s not full of cr@*p.

And, ah, the family nostalgia! Can we all just stipulate to the family stuff and get on with the nitty gritty of how each party will govern?

Does Romney understand that the GOP Senate Majority Leader made it his priority from Day One to make Obama a one-term President? Senator Mitch McConnell (Turtle KY) said it right out loud. Does Mitt agree with Yertle McConnell’s policy of constant obstruction?

29 minutes in – and Mitt’s warming up. He’s got the room rocking with a story about Steve Jobs. So far, it’s not looking like a disaster for Mitt.

But a half-hour into his speech – he’s given no clue as to what he’ll do in the Oval Office. NO specific policy statements. All generalities, bromides and rah rah.

Wow! Romney figured it out! We need jobs! LOTS of jobs! Amazing. I had no idea. HOW will you make those jobs happen, Mitt?

And now the lie about Obama raising taxes on small business.

And now the lie about Medicare.

Wait! Romney has a plan to create 12 million new jobs!

Step Four: Austerity for the poor and middle class

Step Five: Champion small business by getting rid of Obamacare. (What??)

And now he repeats the lie about Obama raising taxes on the middle class, an anti-Gay shout-out, and a bit of religious pandering.

Now Romney takes Obama out of context about stemming the rise of the oceans: another shameless lie.

Boy, he’s piling lie on lie. The crowd loves it.

I can’t take out anymore.

He’s saber rattling against Iran and Russia and I’ve had enough.

I sat through this whole damn thing and my brain hurts. Where’s a bottle of Chardonnay when you need it.

Here’s to next week’s Democratic Convention, President Obama — and a bold, fearless and comprehensive reply to all this GOP rot!