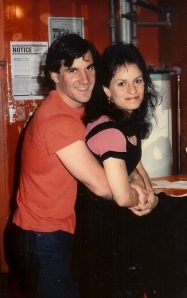 Victoria Zielinski and I met while we were both students at Northwestern University in the late 1970’s. Victoria was a serious Shakespearean actress and I was a guy who clowned around in the Mee-Ow Show comedy revues. She was hot and smart — but she was ahead of me in school and I had no chance with her. I knew she was doing comedy in the Chicago clubs with a group called Laugh Track, (with Jeff Lupetin, Bill Wronski and Gary Kroeger), and I had worked the clubs with a group called H.W.A.T. (Humorous Weapons and Tactics). But Vic and I didn’t do comedy together until the early 1980’s. From the start of The Practical Theatre Company, I tried to cast Victoria in our comedy revues, but she was always busy. Law school. Go figure. That would change in the early 1980’s. 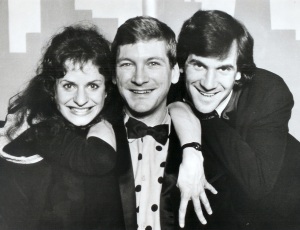 In the 1980’s, it was not strange to see Victoria and me onstage making people laugh in various improvisational comedy revues at Practical Theatre. I was finally able to cast Victoria in our smash hit Megafun at Piper’s Alley in 1983, and we were both in the PTC’s longest-running revue, Art, Ruth & Trudy (1986) with fellow Northwestern alum, Jamie Baron and musical director, Steve Rashid. Art, Ruth & Trudy ran in Chicago for a year – from Club Victoria, to The Briar Street Theatre, to the Vic Theater. That was the first time Vic and I were in a comedy revue together. She was so sexy and funny and smart — I asked her to marry me. But I would have to wait a while longer. 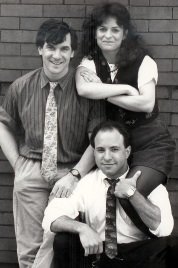 In 1987, Vic and I wrote and performed in Bozo the Town at the (by now aptly-named) Vic Theater. We teamed with another fellow NU alum (and Vic’s high school classmate at Luther South – Go Braves!) Kyle Hefner, and Steve Rashid once again provided musical direction and limitless keyboard skills. As was the case with Art, Ruth & Trudy, Vic’s NU buddy, Beatrix Potoczny choreographed the dances. Steve thought Bea was so sexy and graceful and smart, he asked her to marry him. He didn’t have to wait very long. Soon, she was Bea Rashid. Still is.

"Art, Ruth & Trudy" get tough. (left) in "Bozo", Vic deals with my monkeying around.

Our comedy guru, Sheldon Patinkin, guided us through all of these shows (and we’re still leaning on his comedy counsel today.) The last time Vic and I were in a comedy show together was in 1989, when we accepted Second City founder Bernie Sahlins’ offer to join The Willow Street Carnival. That gig took us to Spain for six incredible weeks to study Commedia del arte with Barcelona’s amazing Comediants – and while Willow Street Carnival didn’t run very long in it’s brand new 450-seat theatre in Chicago’s Clybourn corridor, I was finally able to convince Victoria to marry me. 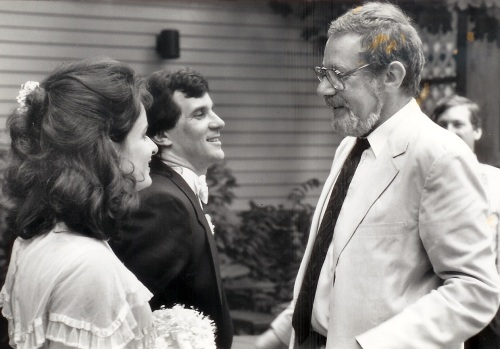 Sheldon Patinkin congratulates the blissful Bride and Groom on their Wedding Day.

Vic and I were married on June 30, 1990. It was the start of a great new family life: parenthood, soccer games, dance recitals and parent-teacher conferences. And for those 20 years of getting our kids from diapers to diplomas, we mothballed our comedy careers. Until 2010, when we decided to get back onstage together in The Vic & Paul Show at Push Lounge, a little cabaret space perfectly situated in our Woodland Hills neighborhood. Another chapter in our funny love story has just begun.

One response to “Vic & Paul: A Funny Love Story”