Click on the graphic for more information or to make reservations!

200 years ago on June 18, 1812, the young upstart United States declared war on Great Britain – then the preeminent world power.

22 years after McCartney’s birth, he and his band, The Beatles, led a British Invasion of the United States.

McCartney’s British Invasion was far more peaceful and harmonious than the British invasion during the War of 1812: the one in which the invaders burned Washington DC and the White House — necessitating Dolly Madison’s legendary heroics in saving the portrait of George Washington.

Given that England gave us Paul McCartney 70 years ago, I am willing to forgive those rampaging Redcoats for laying waste to our national’s capitol in the early 19th Century. 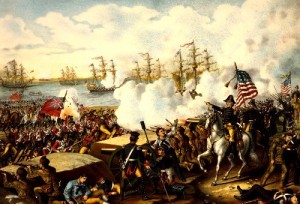 Besides, we kicked their high-stepping, bagpipe-playing butts at The Battle of New Orleans anyway.

Which only makes me long for a McCartney cover of that great Johnny Horton tune.

I’ll just have to settle for this cover by another musical artist from Great Britain, Lonnie Donnegan – the King of Skiffle: an early influence on Paul and his Beatles band mates.

Last night, Friday, June 15th, The Vic & Paul Show began its 2-weekend run at The Beverly Arts Center on Chicago’s South Side. And a good time was had by all. For tickets to the rest of the run, click here. Come out and see the show, share some great laughs — and enjoy a drink at one of the many fine local Irish pubs. 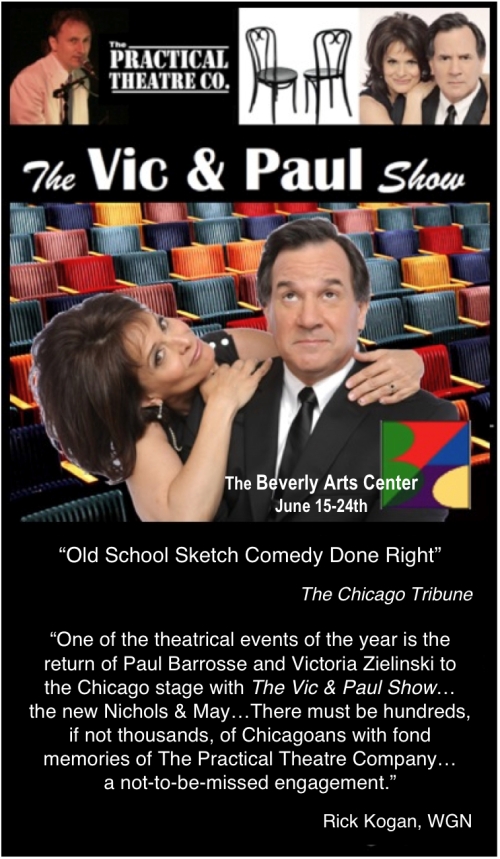 Tonight — Friday, June 15th at The Beverly Arts Center on Chicago’s South Side — The Vic & Paul Show begins a 2-weekend run. For tickets, click here. See the show, laugh like crazy — and enjoy a drink at one of the many great local pubs.

“The Vic & Paul Show” Opens in Chicago this Weekend!

This Friday, June 15th at The Beverly Arts Center on Chicago’s South Side, The Vic & Paul Show begins a 2-weekend run. For tickets, click here. See the show, laugh like crazy — and then enjoy a drink at one of the many great local pubs.

Big Fun in Chicago is About to Begin…

There’s little more than a week before “The Vic & Paul Show” opens at The Beverly Arts Center on June 15th.  Get your tickets here.

On the day before we open at The Beverly Arts Center, Victoria and I are joining our great friend, and my fellow Northwestern and Mee-Ow Show alum, Dana Olsen, for a special comedy show at The Wilmette Theatre on June 14th.  Our musical director Steve Rashid and our original “Vic & Paul Show” director Shelly Goldstein will also join us for a night of “Comedy for the Middle Ages”.

You’ll meet the most interesting people in “Mr. Olsen’s Neighborhood,” Thursday, June 14, at the Wilmette Theatre.

First of all, there’s Mr. Olsen himself, aka Dana Olsen, the writer of such hit films as “George of the Jungle” and “The ’Burbs,” plus numerous TV scripts, who pursues his Hollywood career from the unlikely location of Wilmette.

Then there’s Evanston resident Steve Rashid, an Emmy-winning composer who is also a musician, singer, producer and recording engineer.

Two of Olsen’s other “neighbors” are Victoria Zielinski and her husband, former “Saturday Night Live” writer Paul Barrosse, stars of “The Vic and Paul Show,” an evening of comedy and music which opens a two-weekend run at the Beverly Arts Center the night after “Mr. Olsen’s Neighborhood.”

Lastly, there’s Shelly Goldstein, a cabaret artist and writer, whose numerous TV script credits range from “Laverne and Shirley” to “Flying with Byrd.”

Zielinski, Barrosse and Goldstein all live in Los Angeles but are gathering at the Wilmette Theatre with longtime friends Olsen and Rashid to relive their fun days at Northwestern University (blank) years ago. (Goldstein and Zielinski made Olsen promise not to reveal the dates.) 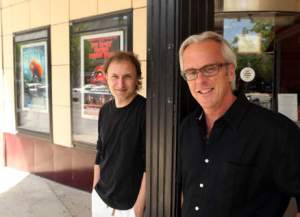 “It’s kind of like we’re getting the old band back together,”  Olsen said of the comedy-variety show he and his friends have  created. “We first worked together in the ‘Mee-Ow Show,’ which is the annual comedy review on campus. [Rashid didn’t work on that show with them.] Then, different incarnations of us worked comedy clubs as a group for a while. After graduation, we followed separate paths in the industry. Now it’s years later and our parental obligations have diminished and we decided to start having some fun with each other again.” 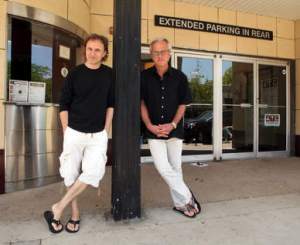 Each performer is writing part of the program. Olsen has created a humorous Power Point presentation. Barrosse and Zielinski are doing a few pieces from “The Vic and Paul Show.” Goldstein will perform selections from her cabaret act, which she has presented all over the world.

Rashid is serving as musical director, as well as doing a segment of the show.

“Dana and I have been friends for quite a while through other friends,” Rashid said, “but we’ve never actually worked together. Whenever we get together, we spend a lot of time laughing so we might as well do it onstage.”

In addition to participating in the musical numbers from that show, Rashid said, “I’ll have a couple of moments. One of the nice things about this show that Dana is putting together is that there will be several opportunities for all of us to be performing together, in one form or another, and we’ll each have a chance to do a little bit of what we do individually.” 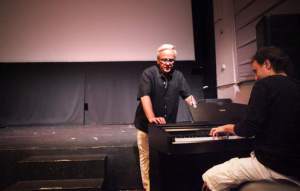 “We’ve written some  sketches for all of us — which has been a real blast,” Olsen concurred. “We’ve been working together on conference calls and throwing ideas around in email, and sending rough drafts back and forth.”

Rashid recalled one of those conference calls. “They were practically writing sketches on the phone,” he said. “It was absolutely hilarious.”

Last year, I posted this rousing (and funny) song about the battle for democracy in the Badger State. With folks going to the polls  in Wisconsin today — it’s a good time to hear my friend Steve Rashid’s song again.

Holy cry-eye! Come here, take a look once! We’re takin’ our message to the Capitol Dome…

Wisconsin native, Practical Theatre veteran, and musical genius Steve Rashid’s pro-union marching song for the Cheddar Revolution was recently played on Thom Hartmann’s national radio show. But more people need to hear it. And the folks on the front lines in Madison could use a good laugh.

Here’s a video I put together at Steve’s dining room table, illustrated with photos of the Madison Uprising by Bill Cronon. Ya Hey!

With two weeks before “The Vic & Paul Show” opens at The Beverly Arts Center in Chicago, Victoria had a conversation with another hometown neighborhood newspaper, The Villager…

“Wine should be available during the show,” said Victoria Zielinski, who is one half of The Vic and Paul Show. “This kind of comedy goes best with wine.”

A collection of tightly-scripted comedy sketches, The Vic and Paul Show will make its BAC debut in mid June and will feature Zielinski, a North Beverly native, and her husband, fellow comic Paul Barrosse, who co-founded Chicago’s Practical Theater Company in the 1980s and who has worked as a writer and producer on such notable television show’s as “Saturday Night Live,” “Little People, Big World” and VH1’s “Behind the Music.”

According to Zielinski, The Vic and Paul Show is the result of conversations which took place around the couple’s kitchen table. It touches on politics, religion, and above all, relationships.

“We’re at that stage in our lives where the kids are grown and we’re thinking, what now?”  she said. “But the show isn’t only about that. It captures the dilemma of being in a relationship at any age.”

A veteran of sketch comedy and improv, Zielinski met her husband while both were drama students at Northwestern University.

“We knew each other in college,” she said, “but we didn’t pay any attention to one another back then, because we were both involved with other people.”

After earning a Masters degree in Performance Studies, Zielinski joined the Laugh Track, a comedy troupe which toured Chicago colleges and clubs. She soon became involved with the Practical Theater Company, a comedy troupe which was started by Northwestern University students and which included such notable Chicago actors as Brad Hall, Gary Kroeger, Seinfeld star Julia Louis Dreyfus, and Zielinski’s future husband, Barrosse.

Zielinski landed several leading roles with the PTC, a troupe which enjoyed marked success during the 1980s, often rivaling Chicago ’s legendary Second City Theater. Her resume from that time also includes roles with the Goodman Theater, the National Jewish Theater and the Court Theater.

Zielinski grew up at 91st and Hamilton and attending Kellogg elementary school and Luther South high school. She grew up loving Original Rainbow Cones and Fox’s pizza, and has fond memories of afternoons spent at Ridge Park and Walker Branch Library.

“There’s not a better place on the face of the planet to grow up,” she said. “Everybody knows everybody else, and there’s a community feeling that truly epitomizes Chicago . I didn’t realize how special Beverly was until I was raising my own kids in L.A. , which is the complete cultural opposite.”

Zielinski and Barrosse were married in 1990, relocating to Los Angeles shortly thereafter to pursue opportunities in television. They have three daughters, Maura, Emilia and Eva.

Confident in the comedic taste of Beverly/Morgan Park, Zielinski is eager to return to the neighborhood of her youth.

“Audiences in Chicago understand comedy,” she said. “I think it has a lot to do with being raised on Second City .”

This is particularly true, said Zielinski, when it comes to the hot button topics of politics and religion.

“We feel very comfortable with our sketches about Chicago politics,” she said, “but that’s because we’re from there. And religion – well, nobody gets Catholic humor like somebody from Chicago .”

Zielinski describes the show as musical, colorful, and physical – a style throwback packed with contemporary material. It was well reviewed in L.A., and when it premiered in Chicago this past December, the Tribune called it “old time comedy done right.”

The 8-performance run of The Vic and Paul Show will take place from June 15-17, and from June 21-24.  Tickets are $22 ($20 for BAC members) and are available at the BAC box office or by visiting www.beverlyartcenter.org.