I’ve been singing and playing guitar in rock bands since my freshman year at Cleveland Central Catholic High School in the spring of 1973. I was lucky to be classmates with Ted Cehovic, the first great lead guitarist in my life, who I got to know as we strummed our way through upbeat folk music-style hymns by Ray Repp and Sebastian Temple at various youth masses and school assemblies. Teddy was impressed enough with my singing, and I was blown away by his prodigious guitar skills. He was 16-years old with the technique of his hero Jeff Beck and the soul of a Delta bluesman. 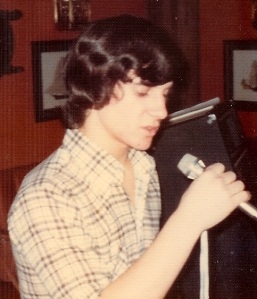 Singing at my first paying gig

For the next two years, we rehearsed in Ted’s basement — where we could play as loud as we wanted because his parents were both deaf. No kidding. We also jammed in our drummer’s garage, working through the Hendrix version of All Along the Watchtower, Bowie’s Suffragette City, and Rock and Roll All Nite by Kiss. We played a few gigs at local schools – and a memorable New Year’s Eve gig at a hotel. I can’t remember who sponsored the event, but I’ll never forget learning Cream’s version of Crossroads, The Allman Brothers’ One Way Out, and a slew of 1-4-5 classics to fill out the three sets we had to play that night. (And, hey, we got paid!) We needed a name for one of our first gigs – and all we could come up with was “Time”. It wasn’t a great band name. And, ironically as it turned out, we didn’t have much time. 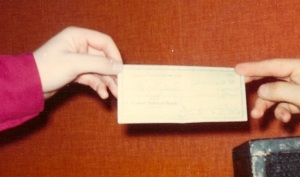 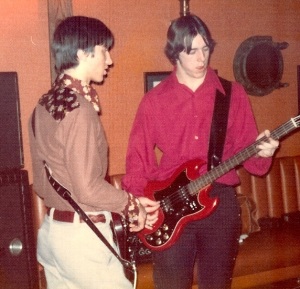 Our sax player, Tommy Kalicky, was another classmate. Tom was also in a working polka band and he actually owned a PA system! He even had business cards for his polka band. I was mightily impressed. Our bass player was another classmate, Eddie Dougan, who, as in so many fledgling rock bands, was learning to play bass as we went along. At one point we had a brilliant, legally blind keyboard player who taught us stuff like Traffic’s The Low Spark of High Heeled Boys and The Beatles’ I Want You (She’s So Heavy). I can still picture our drummer, though his name escapes me. I do remember that he kept great time – and that with a rock-steady drummer, a true prodigy on lead guitar, and my fervent attempts to channel Roger Daltrey, Paul Rodgers, Little Richard, and Paul McCartney – we were an entertaining credit to the great American Garage Band tradition. Until tragedy rocked us.

In the spring of our junior year, Teddy was drowned in a canoeing accident. His death shocked our school – and devastated all of us in the band. I remember playing a slightly revised version of John Bassette’s Oh How I Miss You at our school memorial service…

Now what else can I do?

Telephone’s ringin’ and I’m wishin’ it was you.

Oh how I miss you

Oh how I miss you

Friends try to help me out the best they can

I appreciate it, but they don’t understand…

It went on like that. Not a dry eye in the house. Afterward, the school chaplain had a word with me about turning on everyone’s waterworks. I think he thought it was indulgent. I didn’t care. Ted and I loved John Bassette, and we liked to play that song for the girls – so I sang it for Teddy, for our collective loss, for my own pain, and for the love of music’s power to channel emotion. To this day, I still sing it for Ted Cehovic, my good friend who could have been one of the world’s great guitar players.

Teddy’s loss was the end of Time.

I wouldn’t be in another band for six long years. 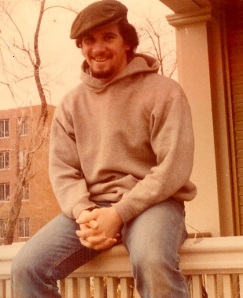 Musically, my freshman year at Northwestern University in the fall of 1976 got off to great start on day one.  I’m not sure what the University’s process was for putting incoming freshmen together as roommates, but it sure worked out for me – and for my further education in the art and history of rock and roll. 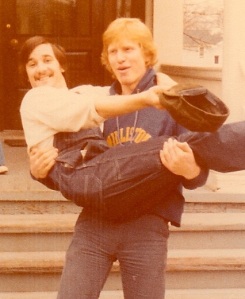 On that first day on campus, in my room on the converted ground floor of a large house at 1936 Sheridan Road, I met my new roommate, William Bradford Hall. On the surface, Brad and I were opposites. Brad was a tall, thin blond surfer from the sunny Pacific shores of Southern California. I was a short, stocky, dark-haired guy from the Midwest who’d never dipped a toe in saltwater. But, on one very important level, we were a perfectly matched pair. We both had guitars — and we both had Beatles songbooks. Within moments, both guitars were out of their cases, and that moment of musical bonding sparked a close friendship that has lasted to this day.

In the years that followed, Brad and I would continue to harmonize our way through The Beatles catalog and collaborate on original songs. (We would also write new plays together, but that’s for another page. See The Practical Theatre Company.)

Our songwriting was inevitably inspired by The Beatles and their rock n’ roll antecedents, but also drew from our mutual love of American standards and musical theatre. 33 years after our first meeting – and impromptu Beatles jam session – Brad and I are still making music together on occasion. And one of these days, we may even complete our unfinished masterwork, a rock and roll musical entitled (what else?) – Rock Me!

Sharing a mic with Brad a few years after graduation, still working that Lennon-McCartney thing.

Sophomore year brought another rock n’ roll collaborator into my widening world in the fall of 1977. I first met William Rush Pearson, a transfer student from Michigan, when we were both auditioning for the Mee-Ow Show, an improvisational comedy revue written and performed by students. Rush and I hit it off from the start. Other than the fact that he was blond, we had much in common, being both short, uninhibited and intense young men from the Great Lakes. We were cast in Mee-Ow, and quickly became writing partners – especially songwriting partners. We wrote and performed quite a few funny tunes for the 1978 Mee-Ow Show In Search of the UnGnome – and for the next two Mee-Ow shows after that: But Is It Art (1979) and Ten Against The Empire (1980). 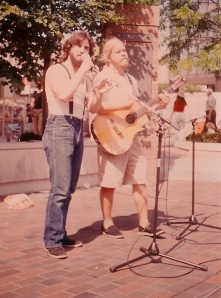 Like Brad, Rush eschewed his first name, William, in favor of his middle name – and also like Brad, he was (and is) a far better guitar player than me. Heavily influenced by the comic musical stylings of the great Martin Mull, Rush could put more chords into one song than I had used in my total songbook to that point. Our process usually began with Rush knocking out an interesting chord progression in a syncopated groove while I conjured a melody — as we built a song out of a moment of inspiration. Our process was as idiosyncratic and serendipitous as the songs we wrote – and, for many years, it worked very well.

By our graduation in 1980, Rush and I had already begun playing out as a duo. I’m not sure if any of the people who booked us knew we called ourselves Filbert & Garbanzo (The Beans) — but we loved our inside jokes as much as our outside ones. We wrote a lot of songs. Got a lot of laughs. And we rocked and rolled when the spirit moved us. But we still didn’t have our own rock n’ roll band.

Rush joined me and Brad shortly after we launched The Practical Theatre Co. (Actually it was originally Attack Theatre, but that’s another story.) Within a couple years, the band would be born — and become the theatre company’s longest-running production. 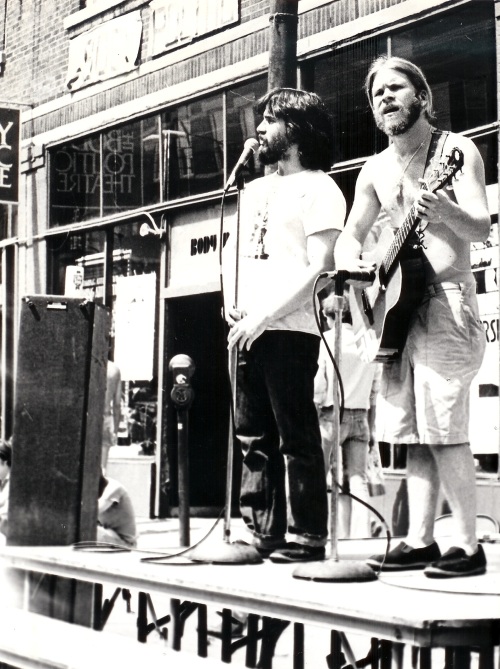 Another hard winter was slowly thawing into a reluctant spring outside our newly built storefront theatre on Howard Street in 1981, as Rush and I were hanging out onstage playing songs before (or was it after?) a performance of Thrills & Glory, our latest comedy revue. The next show in the Practical Theatre’s season was the Barrosse & Hall comedy, Subnormal, and the show’s new cast members were dropping by for some reason – including an older actor we’d never worked with before who had been cast in the leading role: a guy named Peter Van Wagner.

The Riffmaster as Max in "Subnormal"

Pete had just turned 30 (my god, that was ancient!) and he was losing his hair, which made him perfect for the role of the downtrodden insurance salesman Max’s gullible best buddy Dave in Subnormal. But you wouldn’t look at Pete and think “rock god”. So when he asked if he could check out the guitar we were playing, we were fully prepared for a lame rendition of Kumbaya or On Top of Old Smokey. What we got was an astonishing primer of Chuck Berry and Carl Perkins licks that literally rocked our world. Never judge a book by its balding cover.

The band circa 1982. By then, Casey "Casemo" Fox was adding his harmony to our mix.

I can’t remember how soon Pete was dubbed “The Riffmaster”, but from the moment he showed us his fabulous fretwork, we knew we’d found ourselves a lead guitarist – and the band soon took form. By the time the sun finally came out that summer, Pete, Rush, Brad, and I were playing 50’s and 60’s covers (and original songs with a classic feel) at the Body Politic Street Festival and assorted gigs and parties. Our drummer at time was Pete’s younger brother, Ellis, and we also featured the Tom-Tom Horns: Tom “Wolf” Larson (the PTC’s technical director) on tenor sax and Tom “Beefma” Kalicky (my high school band mate who still had the PA system) on baritone sax. Were the horns with us on those first gigs? I’m pretty sure Wolf was. But Beefma and his venerable and durable Shure PA system were not far behind. 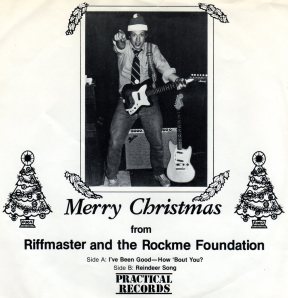 Later that same year, we wrote a novelty tune for the Christmas season called “I Been Good (How ‘Bout You)”, and our musically savvy college buddy Steve Jarvis arranged to have us record the song and its flipside “The Reindeer Song” at Q&R Studios in Evanston: sessions engineered by Justin Niebank, who would one day become a Nashville legend.

This photo of Rockin' Ronny was taken in recent years, but clearly shows he hasn't aged at all since he was 17.

Steve also suggested a local teenager to play drums on the record: a hard-hitting 20-year old wunderkind named Ronny Crawford. Ronny had only recently been a student at Evanston Township High — but he’d already graduated from the Academy of Percussion Passion. Rock and roll starts with the beat — and now we had the best. With our youngest and oldest band members possessed of truly incandescent musical talent, our rock n’ roll future was brightly illuminated. Riffmaster & The Rockme Foundation was established – and three decades later, the beat goes on. 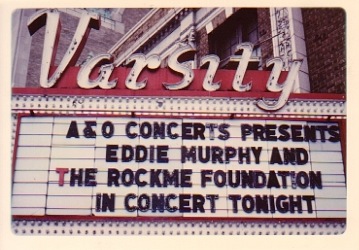 8 responses to “A Personal Rockme Pre-History”