A Comic Celebration to Remember!

For two frigid but otherwise fun and fulfilling weeks on Chicago’s North Shore, the cast and crew of “Mr. Olsen’s Champagne Celebration” staged a series of shows that rang in the New Year with satire, song and classic comic shtick. The three packed performances proved once again that The Practical Theatre Company and its motto “Art is Good” are alive and well in the Windy City.

The Practical Theatre is like “Brigadoon” these days: a magical, fleeting moment of entertainment that vanishes as suddenly as it appears. For those of you who were not able to be among the receptive crowds that gathered at Studio5 in Evanston to witness this rare theatrical event – please enjoy the following photos, taken by former Chicago Tribune photographer Chuck Osgood at final dress rehearsal.

The Opening Number: “It’s been a year to remember — to forget!”

“Limbo” — A bickering couple (Vic & Dana) find themselves in a state of suspended afterlife.

“Parents” — Dana and Shelly Goldstein play parents with a lot of good (and not so good) advice for their high school graduate, bound for Northwestern University.

“Please Come to Starbucks” — Paul is a forlorn, lovesick guy from Cleveland who lost his girl (Vic) to the Southern California dream. He seeks her out in a mournful musical complaint.

“Stop Talking About Him” — A young couple (Daniel Rashid & Emilia Barrosse) struggle with the nagging, negative, inescapable influence of Donald Trump on their relationship.

“Cut In Line” — This is the moment that an unlucky guy (Paul) discovers that the guy to whom he just gave his place in line (Dana) is the 1,000,000th customer and winner of a million dollars!

The Mr. Olsen’ Dancers perform “We’re In The Money”

Dana & Eva perform a multi-lingual duet of “Let it Snow” — just before it goes way off the rails.

With sexual harassment dominating the news, the dancers make a statement. 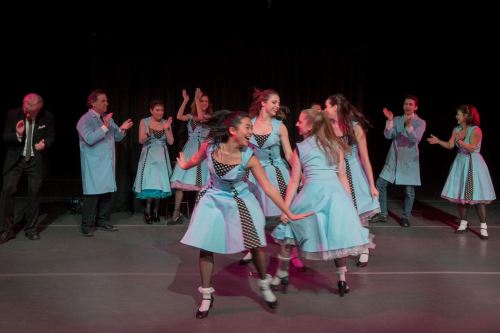 The Mr. Olsen Dancers step lively in “The Possible Side Effects Polka” Steve Rashid performs a nostalgic musical tribute to George W. Bush — with beautiful, inspirational music by Steve and indescribable words by Dubya himself.

The Mr. Olsen Dancers kick up a wild western rumpus.

Groovy Shelly sings “The Middle Aging of The Age of Aquarius”

A proper 19th Century minuet gets a bit topsy-turvy.

Donald J. Trump meets “Hamilton” in a rap production number. “How does a bastard, orange, TV show host with a toupe’, dropped in the middle of a polarized time in our America — with hands so freaking teeny — rise up to be the Mango Mussolini?”

The Closing: “Resist! Resist! — and keep your sanity. Do your best, it’s a test — of our humanity.”