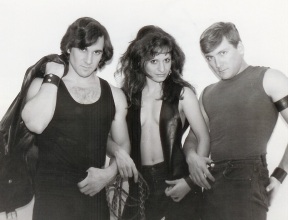 That was true. I did get the girl. And because I emerged from that life-changing experience with Victoria Zielinski as my wife and collaborator, the Practical Theatre was ultimately due for a renaissance.

Alas, the PTC revival would take more than two decades.

The PTC had to wait as Vic and I raised our three wonderful daughters: Maura, Emilia and Eva. But by 2010, the year of our 20th wedding anniversary, with our girls old enough to spare their parents for a few hours a day — Vic and I began to consider whether we were still comedians who had something to say.

We decided it was time to bring the Practical Theatre back. Thus was born “The Vic & Paul Show.”

Inspired by the classic work of Mike Nichols and Elaine May, Vic and I began improvising extended comic scenes in our kitchen, including…

There were times when our improvisations were so lively, so passionate, and so LOUD – that our girls would rush downstairs to see if we were okay. Were we really fighting? Arguing? Drunk?

We polished our routines, edited our scripts, and wrote some songs. A Practical Theatre revue had to include music. That meant involving our long-time music director, Steve Rashid. We booked a series of shows in a tiny local bar called Push Lounge in Woodland Hills, California.

That leap of faith launched a tour that took “The Vic & Paul Show” to Chicago’s Prop Theatre and Mayne Stage in Rogers Park, to Cleveland’s 14thStreet Theatre — and iO West in Hollywood.

After that, we renewed a collaboration with our fellow Northwestern graduate and Mee-Ow Show alum, Dana Olsen, starting with Mr. Olsen’s Neighborhood at The Wilmette Theatre in 2012 — followed by “Mr. Olsen’s New Year’s Rockin’ Neighborhood” at 27 Live in 2013. 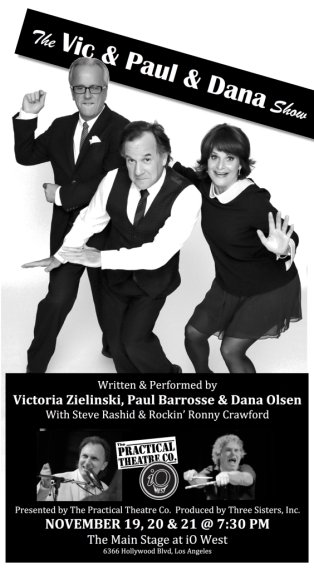 Then, Vic and Dana and I spent a solid year writing new material for “The Vic & Paul & Dana Show.” We were delighted that Steve Rashid and Rockin’ Ronny Crawford joined us for a Hollywood run at iO West in November 2015.

That show in LA revived a PTC comedy tradition that launched North Shore runs of “Mr. Olsen’s Holiday Party” in 2016, “Mr. Olsen’s Champagne Celebration” the following year and “PTC Radio Theatre On The Air” in 2018 – all staged at Bea and Steve Rashid’s fabulous Studio5 theatre in Evanston.

The Practical Theatre is alive and well at Studio5. 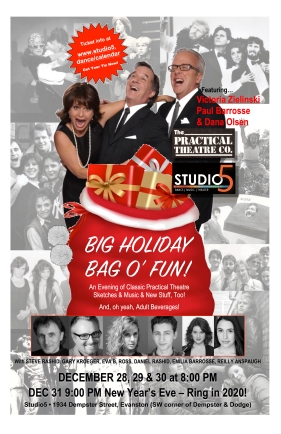 “Big Holiday Bag O’ Fun!” is a compendium of The Practical Theatre’s funniest sketches, dating from our “Mee-Ow Show” days at Northwestern University to “Bag O’ Fun” – our first improvisational comedy revue staged in the summer of 1980 at Evanston’s Noyes Cultural Arts Center – through “The Vic & Paul & Dana Show”.

Plus a few new bits written right up to opening night.

See you at Studio5!