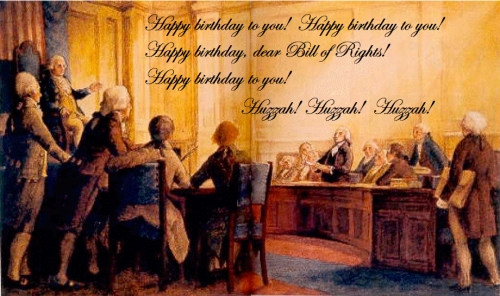 And while constitutional scholars — from former constitutional law professor President Barack Obama, to Supreme Court Justice Antonin “Original Intent” Scalia, to Christine “Really? Separation of Church and State is in the First Amendment? It says that? Really?” O’Donnell – may differ on their interpretations of the Bill of Rights, there is little debate that the first ten amendments to the United States Constitution (ratified by three-fourths of the states on December 15, 1791) provide Americans with freedoms and protections that have inspired the world and made American citizenship a privilege.

And that previous sentence is just about as long-winded and complex as many of the amendments in the Bill of Rights. 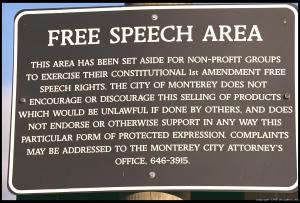 The First Amendment guarantees freedom of speech, freedom of the press, the right to free assembly, the right to petition the government for redress – and the little clause that stumped the failed Delaware Senate candidate/witch: “Congress shall make no law respecting an establishment of religion, or prohibiting the free exercise thereof…” 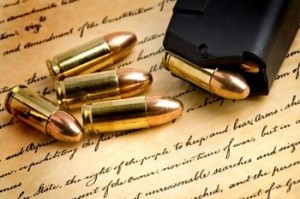 The Second Amendment gives us all the right to keep and bear arms. In other words, we can all have guns, right? Now, what the amendment actually says is, “A well regulated Militia being necessary to the security of a free State, the right of the people to keep and bear arms shall not be infringed.” So I guess we must all be part of a well-regulated militia, right? Is the NRA a well-regulated militia? I know the Aryan Nation is. (So glad those boys have automatic weapons, aren’t you?)

The Third Amendment prohibits the government from quartering troops in your house without your consent. I know we’ve all dealt with this problem at one time or another — usually around the holidays. Your house is already filled with visiting relatives – and a battalion of Marine infantry shows up at your door hoping to squeeze into your guest room for the night. Thanks to the Bill of Rights, you can point them in the direction of the nearest Holiday Inn.

The Fourth Amendment provides protection from unreasonable search and seizure. Unless, of course, you are a poor young non-Caucasian male suspected of having drugs in your home, or you’re on a terrorist watch list, or your electronic mail is swept up in an elaborate intelligence gathering effort, or… (Let’s face it. After the Patriot Act, the ‘ol Fourth Amendment has taken a beating.)

The Fifth Amendment provides due process in legal proceedings and protections against double jeopardy and self-incrimination. This is another amendment that conservatives don’t like. They think it’s too soft on criminal suspects and suspected terrorists. Unless, of course, conservatives are the ones under indictment. (Which happens a lot.) Then due process is a good thing to observe.

The Sixth Amendment provides for trial by jury and enumerates the rights of the accused. But what about victims rights? I can hear Rush Limbaugh now. “Those damn bleeding-heart liberal Framers!”

The Seventh Amendment provides for civil trial by jury. It is the most boring amendment. (In fact, I feel asleep writing that last sentence.) 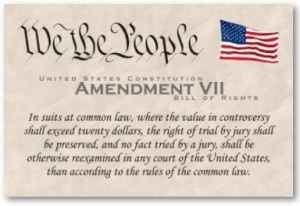 However, you gotta love that the Seventh Amendment actually says, “In suits at common law, where the value in controversy shall exceed twenty dollars, the right of trial by jury shall be preserved…”

Did I mention they ratified this thing in 1791?

The Eighth Amendment prohibits excessive bail and bars cruel and unusual punishment. This is another amendment that’s been taking a beating lately.

The Ninth Amendment is a catchall. It protects rights not specifically enumerated in the Constitution. Like the right to enjoy macaroni and cheese in church without having to share it with a soldier who is reading a naughty magazine. Stuff like that. I think. 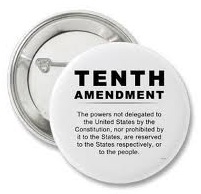 The Tenth Amendment is another grab bag. “The powers not delegated to the United States by the Constitution, nor prohibited by it to the States, are reserved to the States respectively, or to the people.” Read that ten times fast. C’mon, Justice Scalia. I dare you.

So, happy birthday to our poor, beleaguered, bloodied-but-still-standing Bill of Rights!

Hopefully, it can survive for another 219 years.