Our songstress daughter Maura takes our grandson for a ride to Santa Monica on the new Metro train. If you haven’t taken the ride yet — here’s your chance to experience this corridor of Los Angeles to the beach from a fresh, fun perspective. And you can also enjoy two original songs by Ms. Maura.

For more info on what Ms. Maura is doing, you can access her newsletter here.

The Place To Be With Eva B…

Our musical daughter Eva will be playing with her tight and terrific band, the Eva B. Ross Foundation, on Saturday, April 4th at a club called TRiP in Santa Monica. This is going to be a very special event.

There will be a wealth of great music: rock, jazz, blues and folk. Originals and classics.

Besides Eva and her soulful, talented trio (David Miller on guitar, Jules Levy on standup bass and Liam Kevany on drums), the bill will also feature two great up and coming local bands, Loop Garou and We The Folk.

TRiP Santa Monica is located at 2101 Lincoln Blvd. Tickets are $8 at the door. Celebrate the arrival of Spring with music, song and dancing! 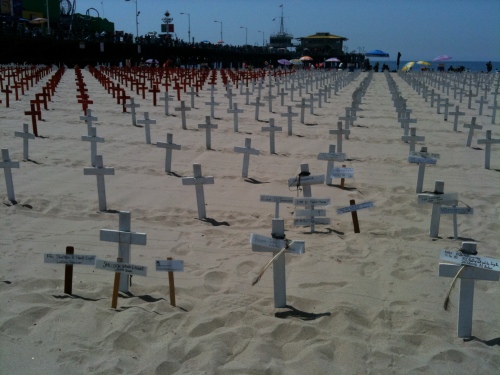 They’ve been doing it for nearly a decade now.

Every Sunday, from sunrise to sunset, a group called Veterans for Peace puts small white wooden crosses into the sand on the beach in Santa Monica, CA. Each cross represents a soldier’s life lost in the wars in Iraq and Afghanistan.

They call it Arlington West.

Years ago, when I first witnessed this solemn display, the crosses numbered in the hundreds. Today, there are crosses and Stars of David and Islamic crescents to represent the 6,447 fallen American servicemen who have given their lives in service to our county.

When the memorial began in 2003, Veterans for Peace would place one cross in the sand for each servicemen killed. As the numbers of lives lost has grown over the years, there are now an inceasing number of red crosses — each representing 10 lost American soldiers, sailors, airmen and Marines.

It’s an incongruous sight, this makeshift, ever-growing military memorial in the shadow of Santa Monica Pier and it’s bustling carnival atmosphere, surrounded by surfers, swimmers and other sun worshippers.  But it’s a necessary reminder of supreme sacrifices made on the other side of the world – far, far away from the pleasures of the Pier and the fun in the sun of Santa Monica Bay.

The goal of Veterans For Peace is to offer “visitors a graceful, visually and emotionally powerful, place for reflection.”

And Arlington West does just that.

Take a moment to ponder the following photos.

On this Memorial Day, pause to reflect at Arlington West. 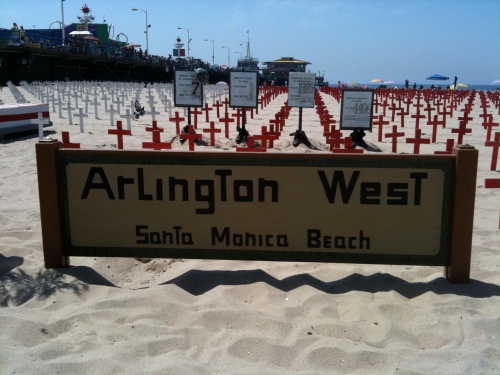 The talented and brilliantly bluesy songstress Ms. Maura, backed by her friend and guitarist Lynz Floren, performed at club TRIP in Santa Monica on Friday night, March 9th. I was lucky enough to be there – and here’s a sampler of iPhone video from her very groovy set.

According to Ms. Maura, here’s what you need to know as you listen to this selection from their sultry, soulful set.

“Combining the stylistically-varied vocals of Ms. Maura with the textured guitar-work of Lynz Floren, this acoustic duo performs dynamic original songs along with some token obscure covers. He of large stature, she of large voice, they met in 2001 as students at UC Santa Cruz. They lost touch for several years but recently reacquainted and found themselves on a common musical journey.”

Enjoy. This is melodic mood music that matters.