ON TYRANNY: A Historian Warns America that Our Freedom is in Danger

I’m a comedian and television producer by trade — and a passionate history buff by avocation.

I don’t call myself a historian. I haven’t devoted enough years in research libraries or earned an advanced academic degree – but I’ve read enough history to know that we Americans are living in a perilous moment in time.

Right now – in the 2020 Presidential election — the future of our democracy is in the balance.

Putting these two distinguished historians work together with the everyday evidence available on objective newspaper front pages and TV news broadcasts, it’s clear that the election and maladministration of Donald Trump is as dangerous and pivotal a moment for American Democracy as we’ve experienced since 1776.

Let me count the ways…

Just like the Nazis rounded up “the other” in concentration camps, so has the Trump regime locked immigrant Central American families in makeshift camps – and put their children in cages.

Read Timothy Snyder’s short and powerful book – and you’ll be shaken to your democratic core.

It CAN happen here.

We can see the potential death of democracy in the feckless cowardice of the Republican Senate. By acquitting Trump of his obvious high crimes against the constitution, they bent their knees like the fearful, faithless German legislators who paved the way for Hitler’s rise to tyrannical authority.

And the world reaped the whirlwind.

Today – it’s not just American government in the balance.

Trump put a coal industry hack in charge of the EPA.

Trump has put a private industry fox in every public agency henhouse.

Trump is putting bootlicking lackeys in charge of the intelligence agencies.

And the spineless GOP legislators are letting Trump do it.

We can’t let them get away with it. 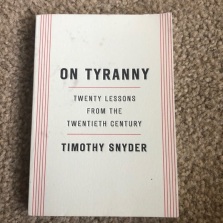 I’m a comedian — but I’m not joking. It’s not an exaggeration.

Our democracy is at stake.

This election year, our American democracy is at stake.

We’ve all got to Vote Blue – No Matter Who!

One response to “ON TYRANNY: A Historian Warns America that Our Freedom is in Danger”