My Life in Sketch Comedy: Part #1

I have been in love with the improvisational comedy revue format for more than 45 years. Improv comedy has been the guiding light of my life.

Most recently, I collaborated as a writer, performer and director of my 23rd comedy revue – celebrating 40 years of Practical Theatre Company comedy with “Big Holiday Bag O’ Fun” at Studio5 in Evanston, Illinois — ringing in New Year’s 2020 with music and laughter.

I’m still as passionate as ever about developing comedic situations and characters, polishing and performing sketches, and eliciting laughs from an intelligent and discerning audience.

Sid Caesar was the King of TV Comedy — the comedic force of nature behind Your Show of Shows, the seminal TV sketch revue that paved the way for great TV comedy revues like That Was The Week That Was, The Smothers Brothers Comedy Hour, The Carol Burnett Show– and, in my adult years, Saturday Night Live, In Loving Color, Mad TV, Chappelle’s Show and Key & Peele.

Jumping ahead for a moment — in 1983 I got a chance to work with Sid Caesar and The Smothers Brothers on Saturday Night Live. How crazy is that?

But going back two decades to 1964, I remember my mom staying up after work to take notes on each episode of the edgy, erudite TV comedy revue That Was The Week That Was— because dad was working the night shift at Reliable Spring in Cleveland.

I was just 8 years old, but I recall staying up late with my mom as we watched the show each week, and she took notes on TW3 for my dad.

Of course, it was all largely above my childish head – especially musical director Tom Leher’s cutting-edge songs. 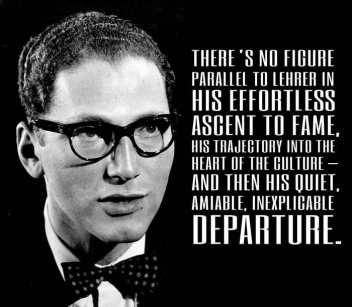 That Was The Week That Was didn’t last long on U.S. network television – but 11 years later, I got my chance to join in the sketch comedy game. And my authentic life began.

Before I knew anything about The Compass Players, Second City, The Committee – or any of my improvisational comedy antecedents, I was cast in my first sketch comedy revue in the summer of 1975.

How much older were my cast mates? Five years? Ten? I had no idea.

Musical director Paul Novosel was talented and visionary, but I had no clue how old he was.

He was the musical director and keyboard whiz for my junior year high school musical, Li’l Abner– and Paul and Zamp liked my turn as Marryin’ Sam enough to cast me in their 1975 summer cabaret comedy revue, Goodtimes.

Goodtimes director Jane Van Bergen was the only woman who ever directed me in a comedy revue. Our three man and three woman cast was the most gender-balanced in a comedy revue I’ve ever been in.

But these folks were so damn cool – and so funny! And they treated me like a peer. It was a magical experience and it changed my life. Performing sketches, crafting funny characters – and getting laughs from a sophisticated audience (with adult cocktails in hand) was an intoxicating experience.

It would take several years for me to get back to the main thing: cabaret comedy.

When I arrived as a freshman at Northwestern University in the fall of ‘76, I planned to make my mark in the legit theatre. I saw myself as a dramatic actor. My goal was a career in regional theatre — perhaps a role in the repertory company of The Cleveland Playhouse.

Then I saw the 1977 Mee-Ow Show highlights in McCormick Auditorium.

I had no idea Mee-Ow wasn’t a long tradition at NU. In fact, just two years earlier, The Mee-Ow Show began as a subversive reaction to the old-fashioned, student-written musical comedy revue, The Waa-Mu Show. It was a variety show that encompassed music, dance, comedy — even a laser light show, I believe.

Mee-Ow was then revamped and re-directed by cast members Bill Nuss and Dusty Kay (‘76) as a sketch comedy review — taking its inspiration from The Second City, Kentucky Fried Theatreand Monty Python.

The show I saw featured the best bits from the 1977 Mee-Ow Show, North by Northwestern: a show written and performed by Jeff Lupetin, Betsy Fink, Kyle Heffner, Stewart Figa and others. It was so damn funny. It was so damn cool. It was inspirational.

The Mee-Ow Show was now my goal.

But I had no idea where The Mee-Ow Show would lead.