Last month, as California experienced its driest year on record, Governor Jerry Brown declared a drought emergency in our glorious Golden State. (Which is currently more burnt umber than gold.)

At a news conference held to make his case for the severity of the drought, Governor Brown used charts to show that this drought is historic — and that it’s time for Californians to conserve our precious water.

But most of us Californians didn’t need Jerry Brown’s earnest show and tell to inform us that we’re going through a shockingly dry season.

We have the clear evidence of our own experience. 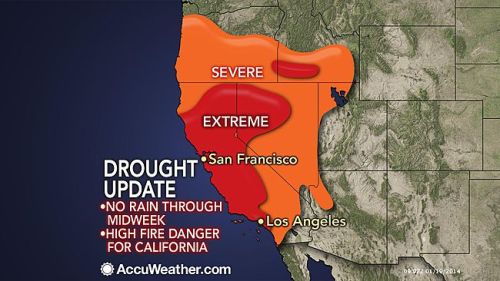 My wife and I took two hikes in the Los Angeles area this past weekend – and our state’s dire drought conditions were dramatically evident on both hikes.

On Saturday we went, as we often do, to nearby Malibu Creek State Park. However, right now there’s no creek.

Here’s a photo of the creek from one of our hikes in the spring of last year. 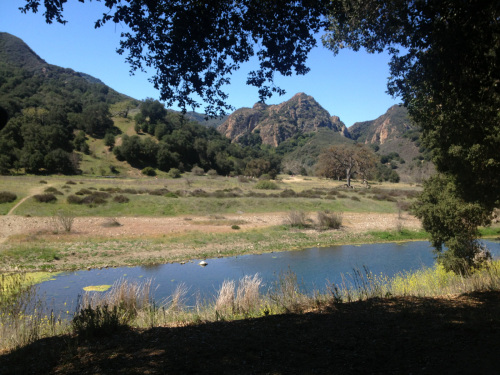 Here’s a photo of the creek as it appears now. All that’s missing is the creek. 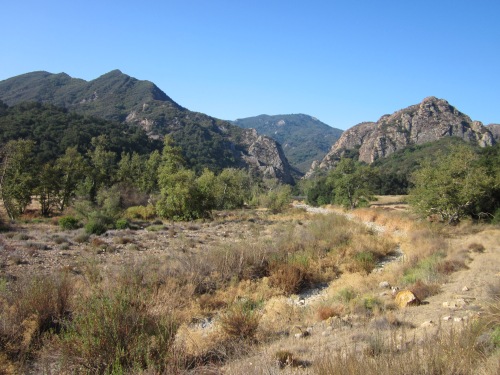 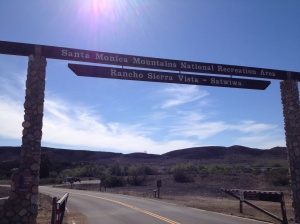 On Sunday, we took our second trip to The Santa Monica Mountains National Recreation Area, Rancho Sierra Vista – Satwiwa — just south of the 101 Freeway on the eastern edge of Ventura County.

This wonderful park encompasses the area where the old Chumash Indian village Satwiwa once stood, as well as 8 miles of winding trail through Sycamore Canyon that the Chumash used as a path to the Pacific Ocean shore. 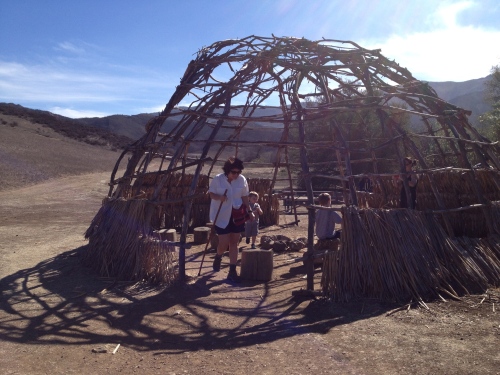 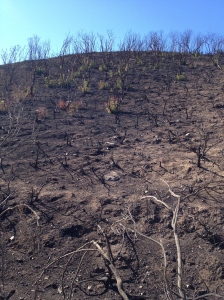 Last year, in May 2013, a wildfire raged across much of this parkland – and the devastation from that conflagration is evident in the charred, blackened landscape.

Wildfires can happen in any season, in any year in Southern California, but drought conditions increase the danger of fire exponentially.

Fire is a natural part of the cycle of life in the Santa Monica Mountains. For ages, coastal Southern California chaparral land like that in the Santa Monicas has experienced infrequent but intense wild fires. These fires usually blaze in the fall, driven by dry conditions and hot Santa Ana winds. Unfortunately, the frequency of fires has increased due to human activity. And the drought doesn’t help. 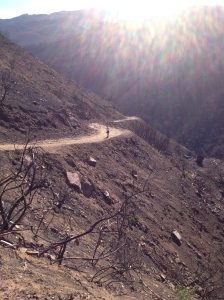 But, while the ravages of the fire can seem almost apocalyptic as you gaze in awe at the darkened, denuded hillsides – you can also see signs of bright green life creeping back into view.

Within a few years, these hills surrounding Sycamore Canyon will be covered in greenery once again. Of course, a little rain would help that process of regeneration along.

Here we are at the fire line: the place where the fire stopped. On one side, you can see Victoria walking under a canopy of live oaks: a sylvan heaven. 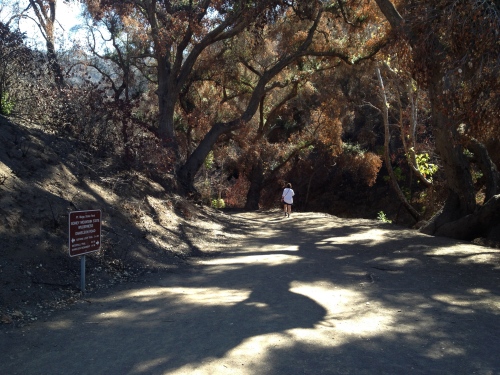 But when you turn around 180 degrees – there’s no canopy of trees anymore: just a charred hillside. 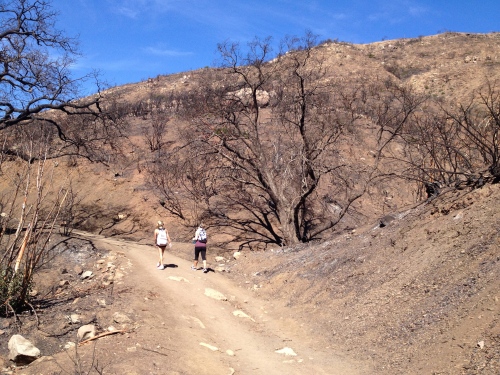 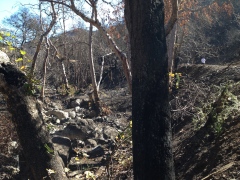 Victoria and I hiked the trail that leads to what, in a normal, rainy winter, is a dramatic waterfall. But our hike along the waterfall trail brought home the deadly dry nature of this year’s drought. What follows are shots of the small pools of water that linger below the tiny trickle that, at this time of year, should be a dramatic cascade. 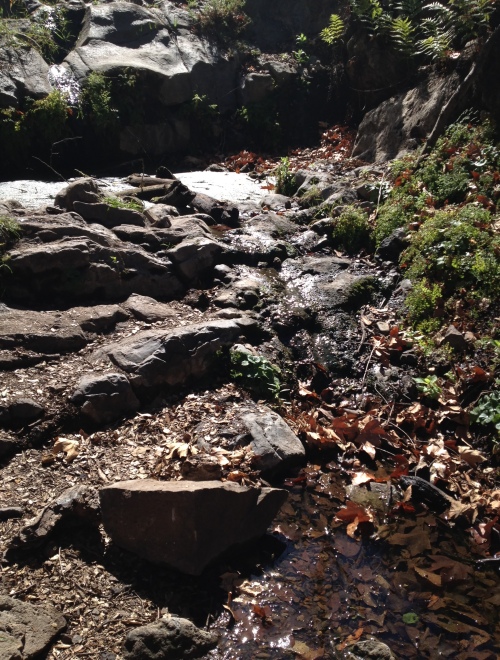 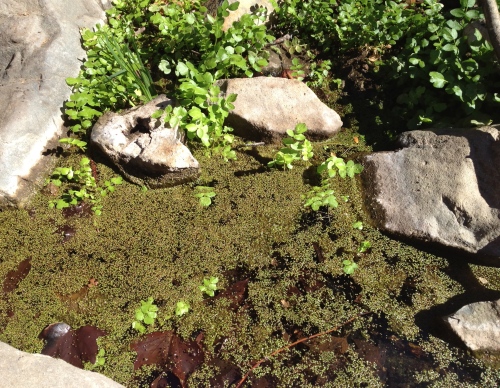 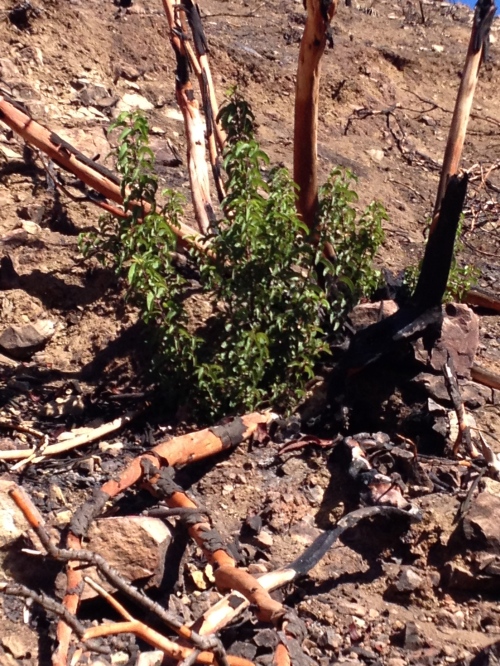 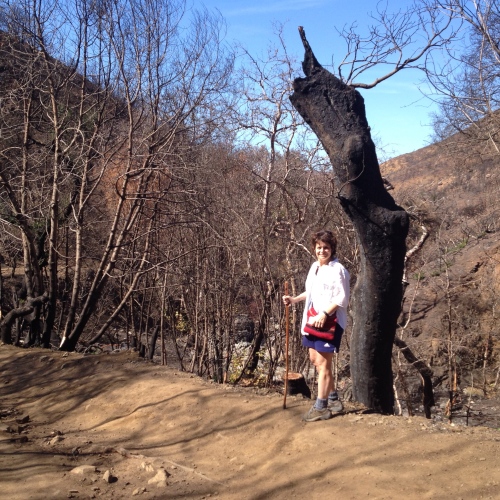 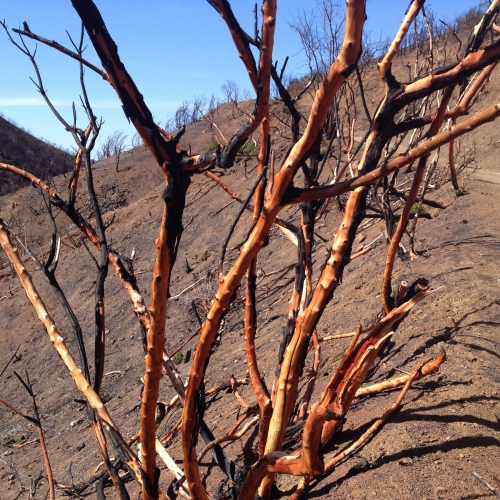 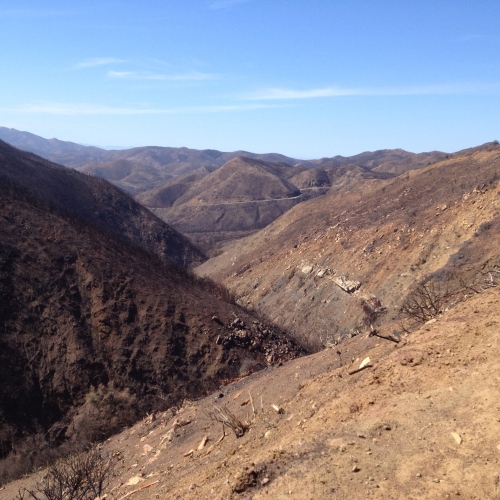