One of the glories of life in Southern California is the ability to quickly escape to the wilderness – whether it’s the ocean, the desert, or the mountains.

From our home at the southwestern end of the San Fernando Valley, we can reach the beach in less than a half hour, the high desert in a little more than that. And in about fifteen minutes, my family and I can be exploring the Santa Monica Mountains at Malibu Creek State Park.

We’ve been coming to Malibu Creek since we moved to Woodland Hills twenty years ago. We go several times a year, and we’ve enjoyed it in all seasons. Each season has its own beauty — but of all the seasons, Malibu Creek shows itself best in the spring.

Located just south of the junction of Las Virgenes Road and Mulholland Highway, the place is a nearby paradise. After you paid the $12 vehicle fee and parked the car — within minutes you can hike to vistas where it’s impossible to tell whether you’re anywhere near civilization. You can almost imagine what the Chumash saw when they settled among these live oaks and sycamores 5,000 to 10,000 years ago. 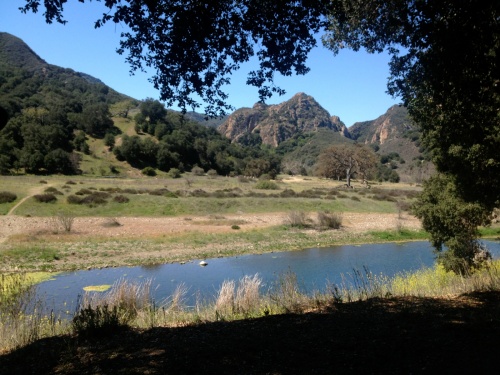 When we first brought our daughters to Malibu Creek State Park, the length of our family hikes were largely determined by our little girls’ enthusiasm for the expedition. We had to carry them along the trail sometimes, but eventually they became just as excited as their parents about spending some quality time at Malibu Creek.

The chaparral-covered mountains that dominate the park are green in the spring and golden by fall – and have been coveted by Hollywood for decades: 4,000 acres of beautiful scenery within an hour of downtown Los Angeles.

They’ve been shooting movies at Malibu Creek since the silent film era — and in 1946, 20th Century Fox bought 2,000 acres of what’s now the park to shoot movies like How Green Was My Valley, Love Me Tender, Viva Zapata, and Planet of the Apes.

But the production for which the park is most famous was shot for the small screen. And that is why, the Barrosse family sets off along the trail to the M*A*S*H site: where from 1972 to 1983, the Santa Monica Mountains stood in for Korea on the classic sitcom, starring Alan Alda. When the girls were young, a couple of rusting Army vehicles were all that indicated you’d reached your destination.

Father Mulcahy at the reunion.

But once you arrived at the M*A*S*H site, if of a certain age, you could easily recognize the jagged hills through which the helicopters passed and the plateau where they landed. You could even see the path that Captain Hawkeye Pierce climbed to meet the incoming wounded.

Since former cast and crew celebrated the 25th anniversary of the series’ last episode in 2008, the M*A*S*H site has gotten a facelift.

There are now signs that explain various features of the site, markers that lay out where the tents and buildings stood – and a freshly painted vintage ambulance offered up to the ravages of nature. 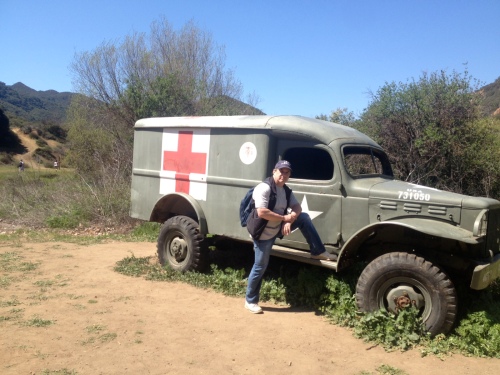 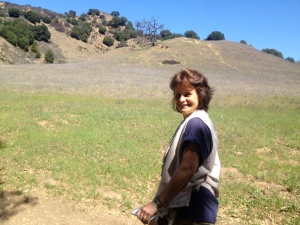 Along the trail to and from the M*A*S*H site, my wife Victoria, daughter and I were delighted to see the wildflowers starting to bloom. And we kept our eyes and ears alert for wildlife.

These geese weren’t that hard to track down. In fact, they just swam right up to Eva as though they were expecting her.

Can you see the well-camouflaged critter in the photo below?

And do you know what this nasty-looking insect is?

It’s a Jerusalem cricket. They’re not really crickets, and they’re not from the Holy Land, but you might find one at Malibu Creek State Park.

Quick. Let’s have another pretty picture.

And another.  Love those wildflowers. (That reminds me: I’ve got make sure to get out to Lancaster to see the poppies this spring.) 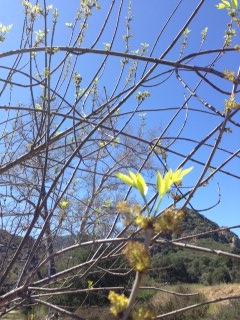 Malibu Creek State Park is a large slice of heaven waiting just next door. I’m already looking forward to my next visit. 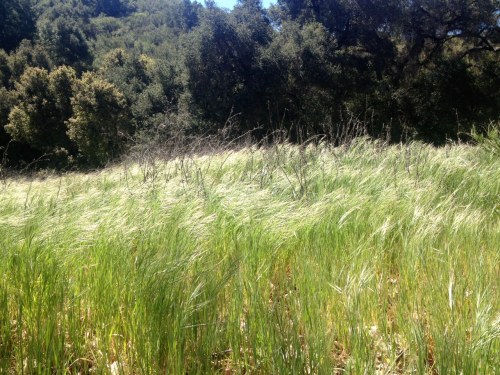 One response to “Heaven Next Door: Malibu Creek State Park”