Wrestling with an Olympic Outrage

If anyone needs a clear sign of the end of Western Civilization, as we know it, they can look no further than the decision of the International Olympic Committee to drop wrestling from the Olympic program beginning with the 2020 Games.

Somehow, the brilliant minds that guide the modern Olympic movement saw fit to preserve team handball, rhythmic gymnastics, and badminton over a sport that has been an Olympic staple since 708 BC.

Olympic wrestling has a time-honored place among such revered, historic, millennia-old classical athletic events as marathon running, sprinting, and tossing the javelin and discus. You won’t see beach volleyball or curling pictured on ancient Greek vases, but scenes of grappling wrestlers festoon plates, vases and mosaics throughout ancient Greece: the birthplace of the Olympic Games.

For the ancient Greeks, wrestling was highly valued as a form of military exercise without weapons. For those of us who grappled for high school wrestling teams (like Cleveland Central Catholic), scholastic freestyle wrestling was the one-on-one crucible that tested our will to achieve personal excellence – and our capacity to do more than we ever imagined we could.

Of all my high school experiences, it was my years as a varsity wrestler, under the guidance of my inspired coach Joel Solomon, that taught me the value of hard work, perseverance, commitment to a goal — and to never, never sell myself short: to never quit on myself.

Right now, across America and around the world, the sport of wrestling is teaching those values to young men and women – as they strive for what?

Do they compete for lucrative endorsements? (Did the great NCAA and Olympic Champions Dan Gable and Cael Sanderson make a fortune selling Wheaties – let alone a Rolex watch or a KIA Optima?) 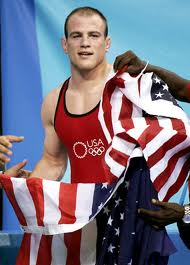 The boys and girls who grapple on the high school and college wrestling mats of America (and around the world) do so to measure themselves against their competition. And the very best do so with one goal in mind: to someday compete for an NCAA championship, to win the U.S.A. Olympic trials – and compete for an Olympic Gold Medal. Why take that away from them?

Wrestling, both freestyle and Greco-Roman events, goes back to the inaugural modern Olympics in Athens in 1896 — which means that wrestling had been an Olympic sport for 2,686 years.

And this year, the IOC decides that wrestling is no longer an Olympic sport???

For shame, IOC, for shame!

If this incomprehensible decision stands, then I have watched my final Olympic Games.

If wrestling is not reinstated as an Olympic Sport, I will never watch the Olympic Games again.

Take a look at Dan Gable.

8 responses to “Wrestling with an Olympic Outrage”