My brilliant friend Rush Pearson is appearing for just one more week in his one-man show “Diary of a Madman” at The Prop Theatre in Chicago. If you live anywhere near the Chicagoland area — don’t miss it. It’s a compelling, entertaining, very funny show performed by a one-of-a-kind talent.

I’ve known Rush Pearson for 35 years. I’ve written, improvised, rocked and acted onstage with him many, many times. But “Diary of a Madman” just might be Rush’s finest theatrical moment. It is not to be missed.

Get your tickets now at: http://www.brownpapertickets.com/event/227520

But don’t take my word for it. Though I rarely devote my blog posts to the words of others — I urge you to read Neil Steinberg’s review of Rush’s show in The Chicago Sun Times…

Gogol’s Madman Challenges Us All

Madness is a universal human condition. Wherever there are people, across the world and throughout history, there are also crazy people, though we don’t like to think about it. Hard enough to notice the insane right here, wandering the streets of Chicago, never mind trying to focus our attention on disturbed beggars in India, or to wonder about the deranged in 1725, lurching about London, their stockings around their ankles, their wigs askew.

Which is what makes “Diary of a Madman” such a treasure, because Nikolai Gogol wrote it in 1835, and it not only is a near-clinical rendition of gathering mental illness — the ballooning self-regard, the fading of reality, the bursts of anger then sudden calm. But it is madness in Czarist Russia almost 200 years ago, one preoccupied with rank, servants, quills, boots and coaches.

Saturday night I saw the one-man show of “Diary” performed by Rush Pearson at the Prop Theatre on Elston Avenue, and it is a disturbing delight. Anyone who knows Rush — and I met him 30 years ago when we were at Northwestern — will joke that his playing Gogol’s unhinged bureaucrat is type-casting. He wasn’t just an actor, but an edgy no-limits wildman, one of those permanent students lingering years after graduation, forgetting to become an adult. Longhaired and big-bearded at a time when people weren’t, particularly people at NU, he lived on cadged food and the sofas of friends, who valued his energy and inherent good humor, the twinkle behind the manic behavior.

He was the star of the Practical Theatre Company, acting in hysterically funny comic reviews along with Julia Louis-Dreyfus, Gary Kroeger, Brad Hall and Paul Barrosse. He also worked at Renaissance fairs, as a mud eater, and when producers from “Saturday Night Live” famously swept into Chicago to raid Practical, hiring Louis-Dreyfus and three others, Rush, the funniest of them all, was off in Texas, eating mud.

That became his career. His Sturdy Beggars are a fixture every summer at the Renaissance Faire in Bristol, Wis., a freewheeling three-man vaudeville performed in a pit of mud, a mix of surprisingly witty wordplay and pratfalls in oozing filth.

Needless to say, I leapt to see Rush perform Gogol. Not a common impulse, apparently — there were 15 others in the audience the night I saw him (and two were other Steinbergs, plus comic Aaron Freeman and his daughter Artemis). The week before, Rush performed for three people one night. That’s tragic itself.

The show is a 90-minute exploration of one man’s sad descent from being Poprishchin, a minor Russian clerk, beset by humiliations and in love above his rank, to Ferdinand the Eighth, King of Spain, in his own mind, desperately trying to maintain royal dignity in a lunatic asylum.

Pearson prowls the room, and a key pleasure of the show is watching his face collapse from beaming, glittery-eyed triumph, marveling at the brilliance of his own observations, into an elderly bewilderment and despair, his mouth a scowl, his eyes blank.

Some people don’t want to be challenged by drama — they want theater to be something pleasant happening on a stage 30 yards away. They do not want a sweaty, bearded maniac’s contorted face raving a foot from theirs. This play is not for them. I loved it.

To me, while we are not all mad, we share the madman’s dilemma. “Why am I clerk?” he cries. “On what grounds? For what reason should I be a clerk?” And then a terrible solution presents itself. “Perhaps I’m not a clerk . . .”

There is no profundity in saying the world has gone mad — it was a cliche centuries ago (“Mad world!” Shakespeare writes.) But I couldn’t help recognize in the twisted thinking of Poprishchin — the vanity, the dismissal of others, the imaginary threats, preferring to see a reality where dogs write letters rather than accept life as it is — the contours of our troubled political moment, where too many Americans embrace any conspiracy, cling to any delusion, rather than tolerate a world where they are not king. 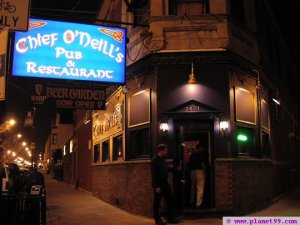 The show runs weekends at Prop Theatre, 3502 N. Elston, until March 25. There’s a first-rate Irish place, Chief O’Neill’s Pub, almost directly across the street, and you might want to work that into your plans, too.

Have you ordered your tickets yet! Get them at: http://www.brownpapertickets.com/event/227520