Fantasy Politics & The Election of 2012

The Iowa Caucuses are over and the New Hampshire Primary is upon us. The Presidential election of 2012 is already well underway. Given that President Obama is unlikely to encounter any serious primary challenge on his open road to the Democratic Party’s nomination in Charlotte, North Carolina in the first week of September – the media focus has been squarely on the Republican contenders vying for the chance to deny Barak Obama re-election on the first Tuesday in November.

Of course, it’s a long, long time until November 6, 2012. We’ll know the winner of the Super Bowl, the NBA Championship, and the World Series before Election Day. And we’ll know the winner of American Idol, The Biggest Loser, Survivor, and who gets the guy on The Bachelor long before we know if any of the GOP field was able to take down Obama. A lot can happen between now and then. But looking at the Republican contenders arrayed against Obama (and each other) it’s hard not to feel the odds are in favor of the World’s Most Famous Former Community Organizer. 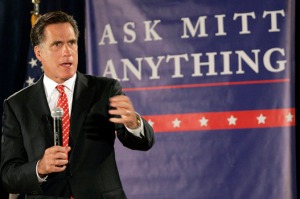 Much has been written (on the Right and Left) about the lackluster GOP hopefuls and the lack of party popularity enjoyed by the “inevitable” frontrunner Mitt Romney. You’d have to be living in a cave (which Osama bin Laden evidently wasn’t) not to have heard about how Mitt’s Mormonism, flip-flopping, and career as a multi-millionaire corporate raider make him a poor fit with this era’s angry, populist, anti Wall Street, Tea Party GOP electorate.

This schism between Main Street Republican voters and Wall Street has rank political opportunists like Newt Gingrich attacking Romney for his role as a profit-worshipping venture capitalist.

Each month (and sometimes each week) brings a new “anyone but Mitt” candidate surging into contention. As if to prove there’s no limit to the GOP’s anti-Romney anxiety, we’ve been treated to the entertaining rise and unsurprising fall of the scandalous blowhard Herman Cain, cute but crazy Michelle Bachmann, and rejected Republican re-treads like Newt Gingrich and Rick “Please don’t Google me” Santorum.

Trying to temper my disdain for these apparently preposterous Republican Presidential candidates, I remind myself that, back in 1980, we all thought Ronnie “Raygun” Reagan was an unelectable right wing nut job. Progressives cannot afford to gloat or get comfortable. However, if the GOP has any chance of winning the White House, the U.S. economy must go into free fall. But with the Dow Jones Average above 12,000 and unemployment falling steadily, the Republicans are forced into rooting for America to fail in order to win an election. Not a good bet.

So, in order to make the Presidential Election of 2012 interesting, I suggest participating in a game that keeps even lackluster NFL, NBA and MLB seasons interesting: a fantasy league. 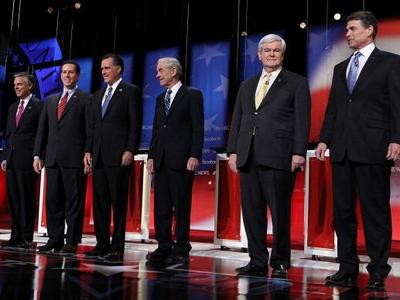 In fantasy politics, you are the campaign manager of your own team of two Republican Presidential candidates. You need to know how the daily news cycle, the primaries and caucuses affect the two candidates on your roster and how to minimize their gaffes, maximize their endorsements, and collect delegates through the long primary season on the road to the GOP nomination. Here’s how the candidates on your roster are impacted by the rules of fantasy politics.

Fantasy points are generated from the action on the campaign trail. When a GOP candidate on your team avoids a dangerously quotable gaffe during a debate, earns a newspaper endorsement, or wins a state primary, your fantasy team earns points for the week. The sum of your two candidates’ points combine to compete against the total for your opponent’s team for the week.

Campaign managers can choose any two GOP candidates in the field as of Tuesday, January 10th, the day of the New Hampshire Primary. I’d say the Virginia Primary – but, of course, Newt Gingrich and Rick Perry failed to qualify for the ballot in Virginia – and our fantasy game would simply not be as much fun without them.

Candidates who are still in the race on Super Tuesday, March 6, 2012, earn 100 bonus points, in addition to any delegates they pick up that night in the collection of primaries and caucuses in Alaska, Georgia, Idaho, Massachusetts, North Dakota, Ohio, Oklahoma, Tennessee, Vermont, and Virginia. If neither of your candidates made it to Super Tuesday, you’re out of luck. And out of your misery.

On the day after Super Tuesday, campaign managers will have 24 hours to “drop and swap” candidates. This may not be fair – but it’s politically expedient: a chance for the rats to escape the sinking ships. However, if a candidate you dropped after Super Tuesday manages to make it to the Republican Convention in Tampa, Florida in late August with even a handful of delegates – you will be deducted one point for every delegate who votes in the Convention to nominate the candidate you dropped.

Sorry, unlike in the football, basketball, and baseball fantasy leagues, all of your GOP candidates must play hurt. Politics is not a game for sissies. There is no disabled list. If there was, a mentally disabled candidate like Rick “Frothy” Santorum, or an emotionally disabled candidate like Mitt “I like being able to fire people” Romney would not be on the roster. Instead, they’re leading GOP contenders. Suit up, shut up, and get up for the game.

Occasionally the official elections returns from a particular state may be recounted and changed to accurately reflect what happened at the ballot box. In such circumstances, campaign managers may block a recount by making an appeal to the U.S. Supreme Court. (See “Bush v. Gore”)

The winning campaign manager is the political genius that managed to back the two GOP candidates who got the furthest down the road on the way to winning their party’s nomination – and earned the right to lose to President Obama by a landslide on Election Day, Tuesday, November 6, 2012.