Quackery in the Backyard

First it was this guy. He appeared about a month ago, swimming in our saltwater pool, looking very picturesque: obviously a male duck (known as a drake) – and clearly a Mallard. Mallards are, after all, the most common wild duck in the U.S.

My wife and daughters and I were delighted to see him – and, as with all our pets, we christened him with a Shakespearean name, Shylock.

We were pleasantly surprised when Shylock kept returning to our pool. There were no fish in our pool, no minnows, no water plants, no edible fauna or flora of any kind (thanks to our pool men) – so clearly, Shylock was just passing through.

Neighbors and other pool-owning veterans warned us that ducks would make a mess of our pool, clogging the filters and fouling the bottom. But I figured, how much damage can one duck do?

Then, a couple weeks later, she showed up. 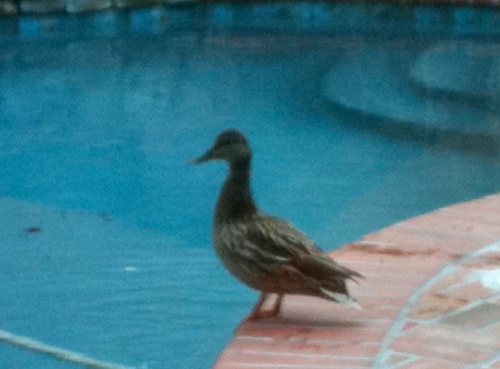 She was obviously a female (known as a hen)– and thus was dubbed Lady MacDuck.

From our hasty research, we learned that Mallards usually begin their migration back from Mexico and points south to their northern breeding grounds in March and April. So Shylock and Lady MacDuck were right on time.

But where would they choose for their breeding ground? Surely, our backyard pool — a lifeless saltwater pond – held no permanent attraction for a pair of mating Mallards?

Then, two days ago, we looked in the backyard and saw this… 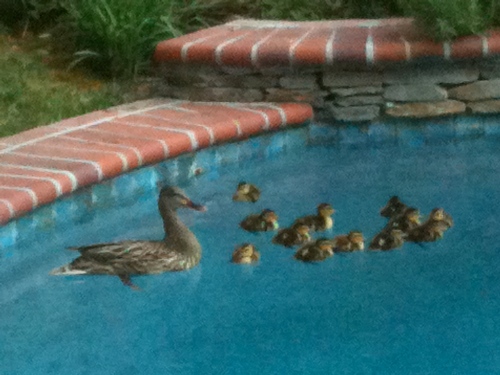 Lady MacDuck was proudly leading a squadron of twelve newborn ducklings around our pool. (Ducklings are precocial — capable of swimming as soon as they hatch.) Their nest, it turns out, was hidden in the landscaping next to the pool.

The dozen ducklings have also acquired names, all from The Scottish Play: Malcolm, Duncan, Macduff, Donalbain, Lennox, Ross, Banquo, Macdonwald, Fleance, Lady Macduff, Lady Macbeth and Cawdor. (Though I can’t tell one from the other at this point.)

The current breeding population of Mallard ducks is estimated to be almost 10 million. 14 of them are now living in and around our pool. But for how long? We clearly can’t run them out. They’re too damn cute. (We’ll have to keep a wary eye on our killer cat, Caliban.)

From what I’ve read, the ducklings will be ready to fly in about two months (50–60 days to fledgling). Though, before I left for work today I looked around the backyard and didn’t see them. Which isn’t too alarming. Heck, I missed the whole 28-day egg laying, nesting and hatching process – and it was going on right under my nose!

I’ve also read that female ducks tend to breed near the place they were hatched — or near a previous breeding site. If so, unless I missed all the previous backyard duck breeding action in past years, Lady MacDuck is an oddball. But, for now, she’s our oddball.

And her dozen ducklings are just about the cutest little cruisers you can imagine.

17 responses to “Quackery in the Backyard”