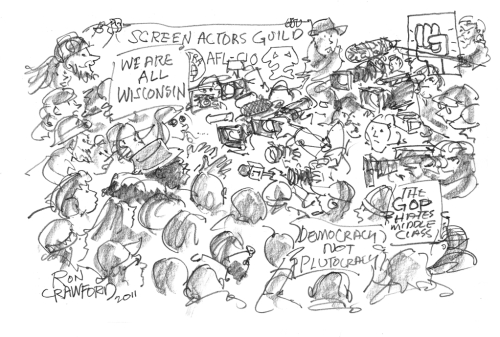 Our resident (and favorite) artist, Ron Crawford, sent us his rendering of today’s demonstration in New York by Screen Actors Guild members in solidarity with their fellow unionists in Madison, Wisconsin.  (That’s Ron himself depicted in the upper right corner of his drawing, holding the sign with a clenched fist.) How Ron manages to be in the moment and yet capture the overall moment is just one aspect of his singular talent. 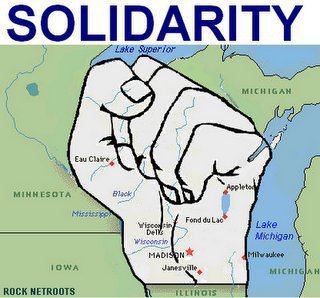 Meanwhile, the momentum from the Madison uprising is being felt in Statehouses across the Midwest. And today, a national poll shows that, by a 2-1 margin, Americans oppose taking away the collective bargaining rights of public employees. According to a new USA Today/Gallup poll, 61% percent said they oppose legislation stripping public employees’ collective bargaining rights in their states, as compared to only 33% who favor such union-busting laws. The majority speaks!