A Wild Winter Weekend in the Windy City! 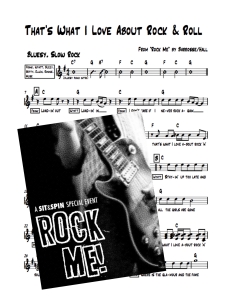 Brad Hall and I flew into Chicago on Thursday, February 3rd, to work on “Rock Me!” — our rock musical set to be performed by a Northwestern student theatre group on March 7 and 8.  The fact that Chicago had just been blasted by an epic snowstorm, the third largest on record, did not deter us. Harrowing tales of “thundersnow” and dozens of cars being abandoned on Lake Shore Drive could not keep us from our appointment with the brilliant musician, Steve Rashid, my daughter Emilia (an NU sophomore) and the other students involved in the production that we were hoping to meet despite the havoc caused by the tons of white stuff dumped on the shores of Lake Michigan.

The blizzard had stuck on Tuesday, February 1st, and by the time we flew into Chicago late on Thursday night, the skies were clear. So clear in fact that, as we made our final approach into O’Hare Airport, we were greeted with as spectacular a view of the city as we had ever seen. The city lights reflected off the snow blanketing every surface to create a stunning golden glow.

These pictures don’t quite capture the wondrous sight we beheld – but they’ll have to do.

Once we were on the ground, we drove northeast to Evanston, where we were Steve’s houseguests. As we arrived in his neighborhood near Central and Green Bay Road, the city street crews were hard at work clearing tons of snow from the main street. Clearly, every city employee that could drive a snowplow or a Bobcat was being pressed into service for every overtime hour they could stand to work.

This video was taken at the corner of Central Street and Central Park. 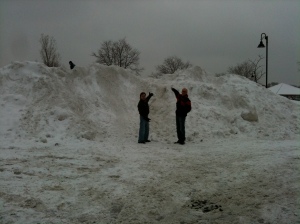 And here’s where they dumped all that snow: Lovelace Park. (No, it’s not named for Linda.)

And BTW – these are not rolling hills dusted with snow.  This is a flat parking lot on which they just dumped these man-made mountains of snow. The Evanston kids were loving it! King of the hill! 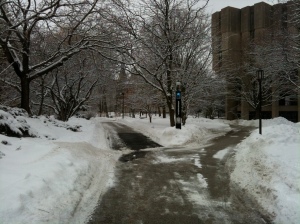 Over the weekend, our meetings with Emilia and the musical director and director of “Rock Me!’ took us to the Northwestern University campus on the frigid lakefront in Evanston, which had been transformed into a winter wonderland.

Brad and I had been on campus for the great Blizzard of ’79, so this fabulous frosting brought back many snowed-under undergraduate memories.

We left Chicago on Monday, February 7th – and it was snowing again. Here’s Steve’s neighborhood on Hartzell, just before the flakes began to fall…

In this video, shot in front of Steve’s house, you can see the big flakes falling. It was time for Steve’s industrious neighbor to get his snow blower out again – and time for Brad and me to get out of town while we still could.

Getting back to the relative warmth of a February night in Los Angeles, I hurried to the Terminal 4 parking garage and found that my car battery was dead. As I waited for AAA to arrive, I was comforted by the thought that at least I wasn’t waiting while stuck in a three-foot drift on a slushy road in Chicago. And that I didn’t end up like one of those unfortunates snowbound on Lake Shore Drive.