When I was a kid — before it became politically and socially incorrect — it was still okay to get laughs by playing a drunk.

Red Skelton did it, too. And he may have done it best. 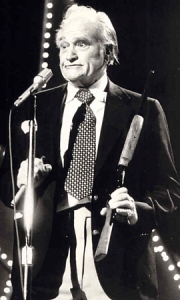 Red was 73-years old in 1986 when I first saw him perform his classic “Guzzler’s Gin” sketch on the stage of The Chicago Theatre. That year, my wife Victoria was a member of the team led by Ray Shepardson (and our pal Drew McCoy) that rehabbed the venerable Chicago Theatre and reopened it on September 10, 1986 with a gala performance by Frank Sinatra. (Frank knew how to play a drunk, too.)

Soon after Sinatra opened the venue, Red Skelton was booked to perform. So, one day that memorable year, Shepardson called Victoria to say he needed someone to pick Red up at the airport and keep him company until his show that night. Are you kidding? Spend a day with a vaudeville, radio, film and TV legend: one of my comedy heroes? We jumped at the chance. (Someday I’ll tell you the whole story of that day — including what Red told me that George M. Cohan told him. Talk about oral history!)

Born to a former circus clown, Red was traveling with a medicine show by the age of 10, and he was in vaudeville at 15. Over the next quarter of a century, he rose to fame on stage, on radio, in film – and in the early days of television. A great slapstick clown, Red perfected his popular progressive drinking sketch “Guzzler’s Gin” over the years in vaudeville and in nightclubs. He performed “Guzzler’s Gin” at his 1940 screen test for MGM — and it was featured in the 1945 film The Ziegfeld Follies.

And here’s another bit of wonderful comedy lore…

Did you know that Red’s “Guzzler’s Gin” bit was the basis for Lucille Ball’s classic “Vitameatavegamin” routine? It’s true. Lucy and Red were both in The Ziegfeld Follies. They became friends — and Red let Lucy rework his sketch and make it her own.

By the time I saw Red do “Guzzler’s Gin” at The Chicago Theatre he’d been doing it for half a century. And it was still funny. Fall down funny.

Red Skelton and “Guzzler’s Gin” were still on my mind in January 2010 when Victoria and I began work on a sketch about the early Old West days in California’s Santa Ynez Valley, north of Santa Barbara – before it became genteel wine country.

I approached my drunken cowboy role with all the subtlety I’d learned from Red and Jackie and Foster and Dick and Dean.  But mostly Red. Red played it so “smooooottthhhh!”

We performed “Whiskey Tasting” as part of “The Vic & Paul Show”, which we performed in June 2010 at Push Lounge in Woodland Hills, California. 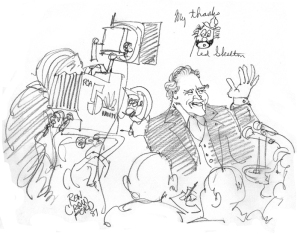 “Here is a drawing I did at the Chicago Theater at the Red Skelton news conference (thanks to you guys).  He looked at it and grabbed it away and signed it.  I still can remember the feel of the warmth in that room radiating off that wonderful man.”