At 1:30 pm EST today, NBC News reported: “Singer Davy Jones of The Monkees has died of a heart attack at 66, the medical examiner’s office in Martin County, Fla. has confirmed to NBC News.”

This one really hurts.

Aside from The Beatles, no band stirred my youthful soul like The Monkees. And as a short, dark-haired lad myself, Davy was an inspiration. On episode after episode of The Monkees’ revolutionary television series, Davy showed that the little guy could get the girl.

And Davy’s voice?  And all those great songs? Simply wonderful.

The glorious three-year period from 1966 to 1968 during which Davy Jones and The Monkees challenged The Beatles for the top of the Billboard charts were the greatest years in the history of AM radio – and the formative years of my life.

It’s hard to say where songs like Daydream Believer, I Wanna Be Free, and “Look Out (Here Comes Tomorrow)” end and I begin.

Three decades after my youthful immersion in late 60’s Monkee Mania, I had the opportunity to write and produce The Monkees: Behind the Music. During the course of my work on that show I met and interviewed Peter Tork and Micky Dolenz, and came away impressed by their warm, easygoing and generous natures. Michael Nesmith was at the time avoiding all things Monkee – but getting Davy on board was still a possibility. So, I called him at his home in Pennsylvania.

Sadly, my call with Davy revealed a conflicted and unhappy man, still struggling with the ups and down of his legendary life as a Monkee. Devoted to his family, his daughters and his horses, Davy was ambivalent about his role as a 60’s pop music icon and his current status as a fading former phenomenon. We talked for nearly an hour. I wish I had written it all down. In the end, Davy passed on being interviewed for my show — but I was honored to have the opportunity to talk to him. 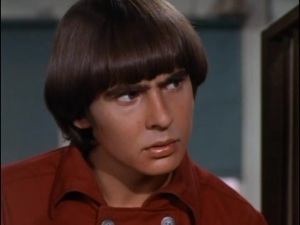 Few performers reach the heights that Davy reached. Alone among The Monkees, he was already a star when he was cast in the band. Heck, he even appeared on The Ed Sullivan Show on the same bill with The Beatles. (As the Artful Dodger in a number from the smash Broadway musical, “Oliver”.)

Much will now be written of Davy’s last years. Was he at peace? Was he still troubled? What were the states of his relationships with the other Monkees?

I hope that Peter, Micky and Mike will soon give us their thoughts on the passing of their bantam band mate. Meanwhile, Monkees fans worldwide can only say, “Thanks for the great music, Davy. And all the fun. Rest in peace.”