It’s hard to believe that YouTube is barely 5 years old. 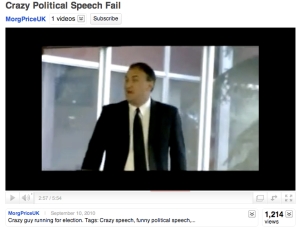 It should be obvious to anyone with access to electricity that since the debut of YouTube, popular culture has changed dramatically. Whether it’s a dancing cat, a woman getting hit in the face with a watermelon, an Indy band with a homemade music video, or a too-comfortable politician saying something off-color at a fundraising barbecue – YouTube can make the trivial, the talented, and the downright terrible alike nationally known within hours and days.

This revolutionary online video portal was the founded in 2005 by Chad Hurley, Steve Chen and Jawed Karim – but it was Hurley who studied design at my mother’s alma mater, Indiana University of Pennsylvania. Chen and Karim were computer science geeks at the University of Illinois at Urbana-Champaign, or as we use to call it in Chicago, Champaign-Urbana.

YouTube’s early headquarters was housed above a pizzeria and Japanese restaurant in San Mateo, California and the first YouTube video was was uploaded on April 23, 2005. That first video, Me at the zoo, features founder Jawed Karim at the San Diego Zoo. You can still find it on YouTube.

Now, even a dinosaur like me is aware of YouTube. In fact, as you’ve seen if you’ve been following this blog since “The Vic & Paul Show” ran in June, I’m gradually getting the hang of how to use YouTube to post video clips and embed video on this blog.

And now I’ve figured out how to create my own YouTube channel. It wasn’t hard. The technology was right at my fingertips. But since nobody uses technical manuals anymore, you’ve just got to stumble around until you figure this stuff out.

My YouTube channel is currently a place where “The Vic & Paul Show” clips live, plus other video treats that will accumulate over time.