Following ABC’s swift decision to cancel its hit series “Roseanne” in the wake of a firestorm over racist Tweets by the show’s star, Roseanne Barr – USA moved quickly to stop production on “Trump”, the absurdist political tragi-comedy which launched to mixed reviews in the Fall of 2016.

Unlike “Roseanne” — which drew 18.2 million viewers for its debut in March 2018 and established itself as ABC’s highest-rated and most watched new series of the 2017-18 season – “Trump” had suffered from historically poor ratings from the outset.

Savaged by the critics, “Trump” relied on relatively strong numbers among its core demographics: poorly educated whites (ages 50-105), white evangelicals (ages 45-Rapture) and racists and xenophobes of all ages.

“Roseanne” was a re-boot of Ms. Barr’s popular blue-collar family sitcom, which ran from 1988 to 1997. “Trump” was the unlikely spinoff of “The Apprentice”, the NBC reality competition series in which Donald Trump played a business mogul who knew how to run a successful organization. 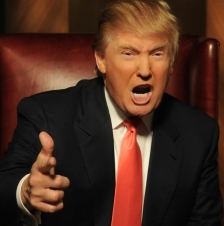 Trump became famous for whittling down the contestants by firing one of them at the end of every episode. “You’re fired” became its host’s trademark line.

Now, ironically, “Tump” has been fired by USA.

Unlike the format of “The Apprentice”, which required its host to project an image of an executive endowed with high business acumen, core competency, wisdom and intelligence, “Trump” turned that model on its head. In “Trump”, Donald Trump’s petty, vulgar and narcissistic “President Trump” character lurched from one chaotic episode after another, displaying none of the admirable executive qualities he’d shown in NBC’s long-running reality series.

In a statement announcing the cancellation, USA noted that “’Trump’ was never a ratings winner, but we hoped that it would improve over time and widen its appeal to a larger, more inclusive audience. It failed to do so.” Left unspoken but resoundingly clear in USA’s statement was the fact that “Trump” attracted a negligible audience among blacks, Latinos, and other minorities – nor was it a hit with large majorities of women, educated whites and religious people with a moral conscience.

USA’s statement went on to say that, “Over its less than two-year run, “Trump” presented an increasingly skeptical public with a revolving cast of ever more bizarre characters and outrageous plot lines that defied credulity and provoked confusion and disgust among the wider audience we had hoped the series might someday attract.”

USA insiders say that the final nail in the “Trump” coffin may have been driven in by its titular star’s recent Tweet wishing Americans a “Happy Memorial Day!”

For some inexplicable reason, USA plans to run the remaining episodes of “Trump” until the mid-term elections in November 2018.