Today, on the Olympic Slopestyle snowboard course, two guys from Cleveland shared a moment of Olympic history. To be sure, one of us did far more than the other. But in the end, your author may have played a larger part than anyone might have imagined. 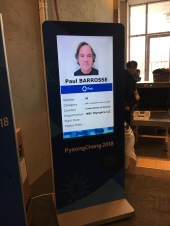 We begin in the morning. I went through security at Phoenix Park shortly before 10:00 AM – the scheduled start of the men’s slopestyle finals.

As always, after the screening software read my credentials — and my shabby, unkempt photo and vital info flashed upon the screen — I was granted passage onto the venue.

I could tell right away that the environment at the venue was very different from the days before. 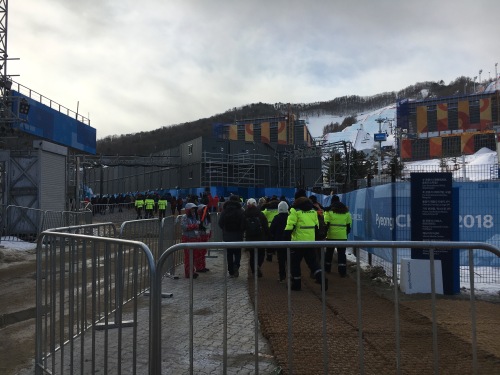 There were a LOT more people — many, many more. 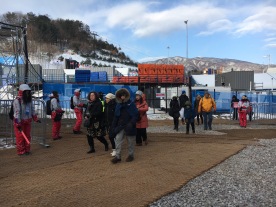 An Olympic finals event was about to take place.

Medals were going to be earned.

And many people from across the world were gathering to see if their beloved athletic countrymen would lay claim to gold, silver or bronze. 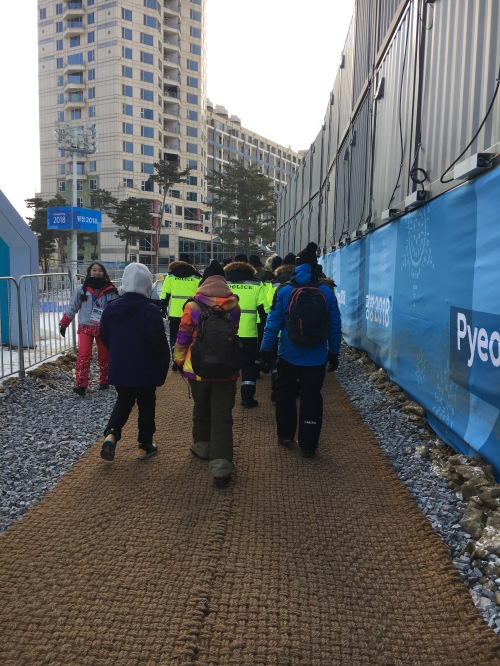 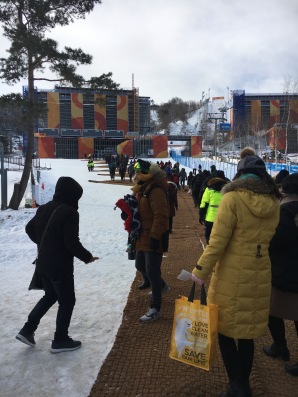 Up until today, there were no crowds at our venue. The only people I saw were NBC employees, OBS folks (Olympic Broadcast employees) and Olympic athletes and coaches. Now, I joined masses of enthusiastic fans as we made our way up the mountain to the grandstand erected at the bottom of the slopestyle course.

As I schlepped my way uphill, I was gratified to see that the police were in force.

They walked up the hill with us and they were stationed at the base of the venue. Nobody seemed concerned for their safety. I didn’t even think about it. The world was gathering to have fun and share the joy of winter sports. And we all appreciated the vigilant security folk. 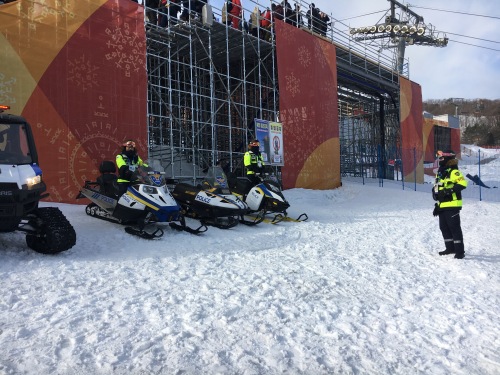 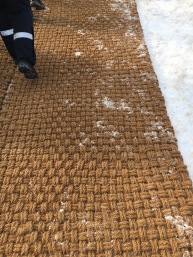 I also appreciated the woven burlap mats that were laid out for us as we made our way up the mountain. Back in Mammoth, California a month ago, I must admit that I did a lot of slipping and sliding on my way up to the halfpipe finals. These burlap mats made our ascent so much easier – and safer.

Up and up and up we went.

This is a mountain we’re climbing, after all.

And if our climb wasn’t as steep as it was — just how dramatic would this slopestlye finals run be? 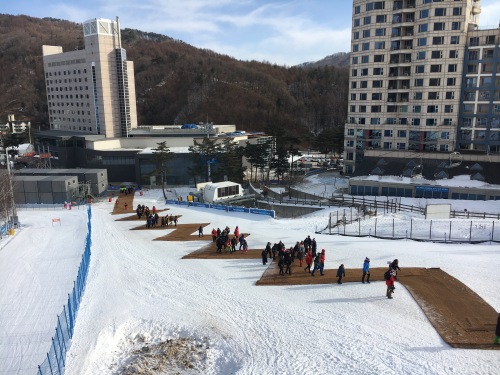 Every step we took promised greater drama on the course above. 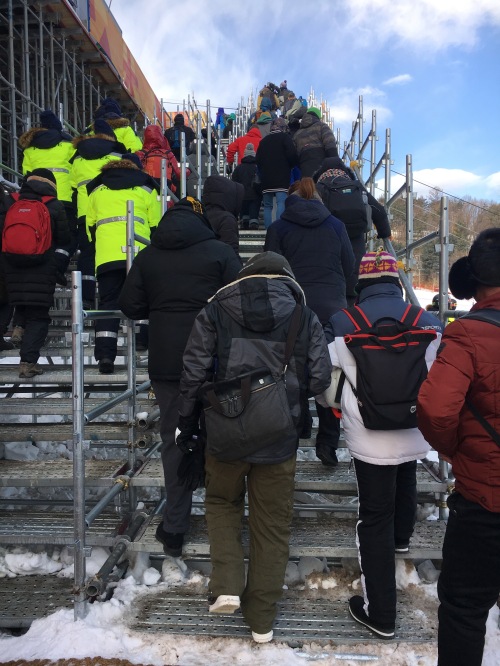 Arriving at the base of the slopestyle run, I could see both the course above… 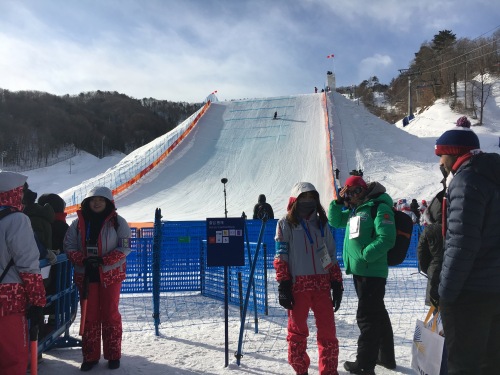 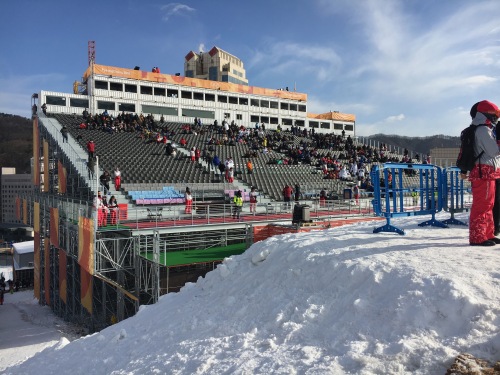 And, of course, the boisterous international crowd — proudly representing their counties and getting psyched up to cheer on their nation’s athletes.

Unlike many Winter Olympic events, it’s impossible for the live audience at the slopestyle venue to watch the athletes as they make their way through the course.

Those of us in live attendance at the event must watch on video as the athletes make their way down the course. 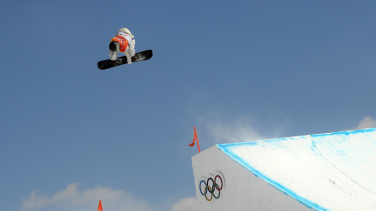 We can catch fleeting glimpses of the boarders in the distance far above us – but it’s only when they launch themselves into the air on that final jump that they come fully into view, rocketing down the hill to the finish.

Sometimes they arrive at the finish upright. Often, they crash land right in front of us. It certainly makes for a dramatic finish. 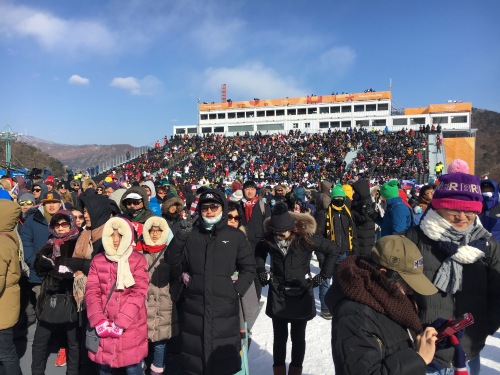 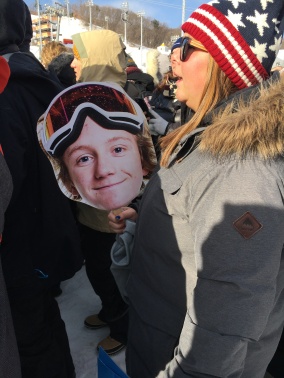 Of course, I was primarily interested in the prospects of the one American in the final: 17-year old Redmond “Red” Gerard.

I met him this past January in Mammoth, California.

When we interviewed Red in Mammoth, the Cleveland native (Rocky River, to be exact) told us that he wasn’t all that into the Olympics.

He was all about the X-Games and the Mountain Dew Tour.

As far as he was concerned, the Olympics were just another contest.

Red’s first two runs spoke to his blasé Olympic attitude. He wiped out both times – displaying none of the free-spirited style, talent, tricks and focus that earned him a spot on the U.S. team – and his berth in the finals. Meanwhile, over the next two rounds, the Canadians in particular were putting down runs that left Red Gerard at the very bottom of the standings going into the final round.

Then Red uncorked the magic in his final run… 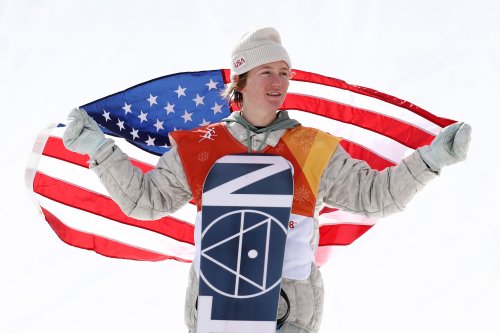 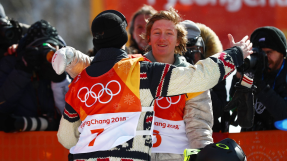 17-year old Red Gerard – too young to vote in the United States – earned our nation’s first Gold Medal in the 2018 Winter Olympic Games.

Sure, he put down an amazing final run.

But what part did Red’s fellow Cleveland native play in his unlikely Olympic victory? 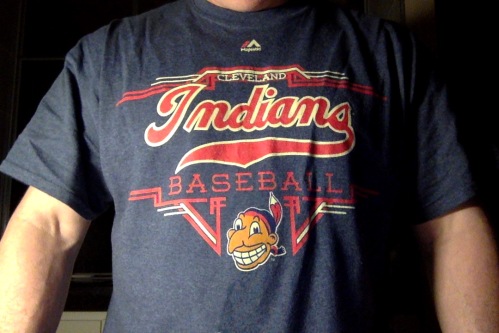 Chief Wahoo’s days may be numbered – but he hung in there long enough to give Red Gerard the winning edge.

10 responses to “My PyeongChang Diary (Part 5)”