On the 2nd of February I took a 14-hour flight to South Korea – and my first Olympic experience.

I don’t normally talk about my television work on this blog.

I post a great deal about my theatrical passion projects, performing comedy onstage – but making TV is what I do to pay the bills. It’s fun. But it’s basically comfy factory work.

However, my latest TV gig is a real adventure. So, I’ll try my best to share what I can about my experience in PyeongChang for the 2018 Winter Olympic Games.

I’m here as part of small crew tasked with crafting a short documentary on 20 years of Olympic Snowboarding. It’ll air before the closing ceremony. I’m used to writing and producing documentaries – but being a tiny part of the vast Olympic media machine is a whole difference scene.

At the moment, the athletes haven’t started their practice runs yet, so the Phoenix Park compound resembles a hastily assembled military installation. Large vehicles parked side by side, folks in uniform bustling around from mobile unit to pre-fab trailer, passing thru security checkpoints, flashing IDs, and talking in a jargon that’s sometimes even harder to understand than Korean. 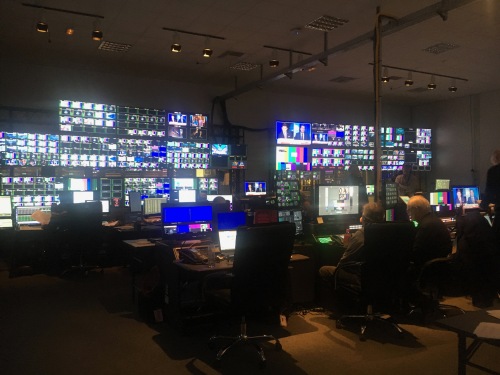 The nerve center of the International Broadcast Center. I think they need a few more monitors.

Point of information: When my father was in Korea in the early 1950’s — he really was in a military installation. If that’s what you’d call the front lines of the Korean War. Lucky for me, North and South aren’t trading artillery volleys like they were in my dad’s day. In fact, I watched the North and South Korean unified Olympic women’s hockey team play on TV this morning. It was a great thing to see.

Unlike my G.I. dad, who spent his time dodging mortar rounds and freezing his butt off in a tent pitched in what is now the DMZ — I retire each day to the White Hotel, a comfortable, if entirely antiseptic lodging just a short walk from Phoenix Park. Each night the hotel hosts a beer garden in the lobby. Koreans are big on beer. Chardonnay not so much. In fact, I’m still in search of a good Chardonnay. (Okay, so my father’s wartime hardships were worse — but then again, he was never a white wine guy.)

In a couple days, the snowboard events get underway.

In the meantime, I’m trying to figure out how our little documentary unit fits into this whole operation.

And now a Korean word from Dr. Suess…

18 responses to “My PyeongChang Diary”