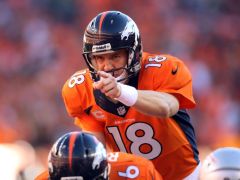 The NFL conference championship games that were played today were as thrilling and satisfying a pair of gridiron contests as a football fan could desire. It was great to watch two veteran quarterbacks like Tom Brady and Peyton Manning face off for the AFC title – and then enjoy the next generation of star quarterbacks, Russell Wilson and Colin Kaepernick, do battle for the NFC crown.

However, in the lead-up to these games – and undoubtedly in the two-week media hype extravaganza that will precede the Super Bowl, there’s one thing that will bug the hell out of me.

In all the talk about Manning and Brady and Wilson and Kaepernick and the great quarterbacks of all time – there’s one name that won’t be mentioned.

It’s the one name that should always be mentioned.

A couple of months ago I was listening to sports talk radio host Colin Cowherd hosting a discussion of the greatest NFL quarterbacks on his morning radio show. Cowherd had the nerve to say he didn’t want to hear about guys like Otto Grahama who played in the “no face mask era”. 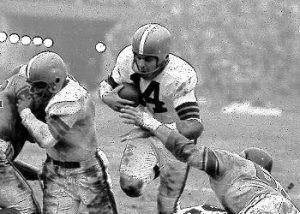 (Later in this post, I’ll show why Cowherd’s comment proves there’s an even deeper gash in his NFL football knowledge regarding Graham and face masks.) 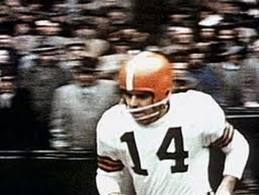 Then, last month, The Los Angeles Times ran an article by Mike DiGiovanna ranking the top 10 sports records that’ll never be broken. Candidates were chosen from professional sports, the Olympics and major college sports programs – and the writer limited his choices to records set from 1940 on.

But DiGiovanna did not find a spot on his list for the most unbreakable professional sports record of all post-1940. It’s a record that will always be held by Otto Graham.

After his brilliant college career at Northwestern University was interrupted – and his professional career was delayed — by his service in the Navy during World War Two, the great Hall of Famer Otto Everett Graham, Jr. played 10 seasons of professional football for the Cleveland Browns – and took his team to the championship game all ten years!

That’s right, ten out of ten.

Let me say that again.

Otto Graham played 10 seasons of pro football for the Cleveland Browns – and took his team to the championship game all ten years!

And he won 7 of those 10 championship games.

Can you imagine a more unbreakable sports record?

From 1946 to 1949, Graham and The Browns dominated the All-America Football Conference. Then, they joined the NFL in 1950. Did Otto and his Browns struggle as an NFL expansion team? Hardly. They simply ran off an unprecedented and unequaled string of 6 straight NFL title game appearances from 1950 to 1955.

After that, the legendary Otto Graham retired as a player at the top of his game. (Just like another Browns legend, Jim Brown, would do in the following decade.) 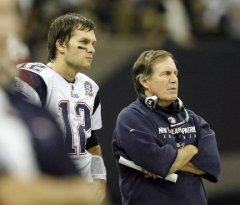 It drives me crazy to hear otherwise intelligent and knowledgeable football pundits talk about Tom Brady and Coach Bill Belichick as perhaps the most successful quarterback and coach combo in NFL history. 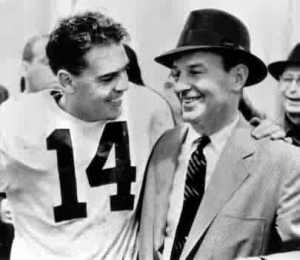 Paul Brown was coach of the Cleveland Browns during Graham’s entire career. Did Brady and Belichick get to the title game 10 seasons in row?

Okay, let’s throw out the AAFC years and stick to Brown and Graham’s NFL years. Have Brady & Belichick gotten to 6 NFL championship games in a row? And Brown & Graham won three of those title games, including Graham’s last game, the 1955 championship. Like I said, Otto Graham went out on top.

And, for all you stats geeks, consider this: 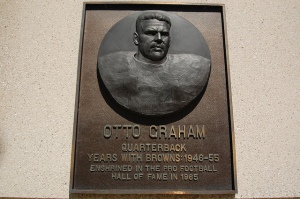 Basically, Otto Graham was good for a first down every time he threw the damn football. 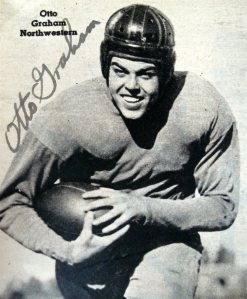 Graham also holds the record for the highest career winning percentage for an NFL starting quarterback, at 0.814. If winning is the greatest measure of a pro quarterback – Otto Graham was better than Johnny Unitas, Joe Montana, Dan Marino, Terry Bradshaw, Tom Brady and all the others.

And he was tough as nails, Colin Cowherd.

In fact, Mr. Cowherd, for your information — Otto Graham played a role in ushering in the face mask era in pro football.

Otto Graham led the Browns to 11 straight wins to start the 1953 season. (Their lone loss came in the season’s final game against the Philadelphia Eagles.) Late that season, in a game against the 49ers, Graham took a forearm to the face that opened a nasty, bloody gash it took 15 stitches to close. Was he done for the game?

No way. This was Otto Graham.

His helmet was fitted with a clear plastic face mask and he came back into the game — which The Browns won. Graham’s injury helped inspire the development of the modern face mask.

All right, I’ve had my say. Look it all up yourself. I’m tired of getting pissed off and wanting to throw things at the radio and TV when I hear all this yakking about the best NFL quarterbacks ever – and never any love for Otto Graham.

Now, onto the Super Bowl.

Peyton Manning is amazing. Russell Wilson is exciting. But Otto Graham was the best ever.

And I’d say that even if he weren’t a fellow Northwestern alumnus.

One response to “Otto Graham: The Greatest Pro Football Quarterback Ever”