The VP Debate: How Joe Biden can take Paul Ryan to the Woodshed.

The Vice Presidential debate is coming up this Thursday evening, October 11th, from 8 to 9:30 p.m. EST. The debate will be held at Centre College in Danville, Kentucky where ABC news chief Martha Raddatz will attempt to moderate a discussion on both foreign and domestic policy issues. (Ms. Raddatz should be enlightened by Jim Lehrer’s feckless performance in the moderator’s seat.) 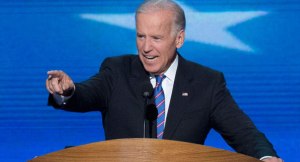 On Thursday night, Joe Biden will have an excellent opportunity to confront Paul Ryan about his chameleon running mate’s latest policy flip-flops. Keeping “Ryan on the defensive by challenging him to answer for Mitt Romney’s whopper of an Etch-A-Sketch performance in the first Presidential debate is the key to a Biden victory that can move the polls back in President Obama’s direction.

After Paul Ryan’s disastrous, fact-checker’s delight of a convention speech, he’s got his own image problem as a politician of dubious honesty.  And Ryan has yet to reconcile his own consistently uber-conservative policy positions, including his infamous Medicare-killing budget plan, with Romney’s shifting stances — which careen from the far right to the center depending upon Mitt’s audience.

With that in mind, here are some things that Fighting Joe from Scranton can say to take the fight to Pipsqueak Paul from Janesville.

How many years of tax returns did you give Mitt Romney when he vetted you as his running mate?

So, if Romney felt he needed 12 years of your tax returns to decide on you as his running mate – why should the American people accept just two years of Mr. Romney’s tax returns?

Is it true that Mitt Romney has proposed a 20% across-the-board tax cut and a reduction in the corporate rate?

Okay, we all heard you tell Chris Wallace on Fox News that it would take too long to explain the Romney-Ryan tax plan – but I’ll be happy to give you all the time you need to tell us the specific deductions and loopholes you’ll eliminate in order to close the 5 trillion dollar gap left by Mitt’s 20% tax cut and his cuts in the corporate rate?

Just days after you were announced as his running mate, Romney distanced himself from the budget you famously proposed in Congress. What parts of your budget does Romney agree with? For instance, does he agree with turning Medicare into a voucher system?

How will cancer patients pay for all their needed care with a $6,400 dollar insurance voucher? And how will you stop insurance companies from simply raising their rates to swallow up that $6,400 voucher and grab even higher premiums?

In his debate with the President, Romney kept saying that your plans to end Medicare as we know it would not affect today’s seniors. Listen, Congressman Ryan, I’m a senior citizen. Do you think I’m willing to sell out my children as long as my benefits don’t change? If you think so, you don’t know the way America’s seniors – the folks we call “The Greatest Generation” – feel about the safety net that Franklin Delano Roosevelt created with the help of a Democratic Congress. You Republicans fought Medicare and Social Security all along the way – and you’re still trying to kill the New Deal, aren’t you?

Just before the last Congressional session ended a month ago, Senate Republicans filibustered a bill that would have provided much-needed funds to help our Iraq and Afghanistan veterans find a job. Was that a good thing to do? Should Mitch McConnell have let that veteran’s jobs bill come to vote? Don’t we owe that to our nation’s warriors?

Do you agree with Senate Majority Mitch McConnell that, quote, “my number one priority is making sure president Obama’s a one-term president”? Did Senator McConnell kill the veteran’s jobs bill – and hurt our troops — just to deny President Obama a popular legislative victory in an election year?

That should be enough to keep the whelp Ryan back on his heels.

I don’t think older voters in the swing states – especially Ohio and Florida – will cotton to a young, untested punk like Ryan getting testy with an accomplished elder statesmen like Joe Biden.

Like I said, Joe doesn’t need to be polite or deferential with Ryan. Not like he had to be with an untested, overmatched woman like Sarah Palin. Ryan needs to show respect for his elder. And that means Joe can take the fight to Ryan without fear of being too aggressive.

America may not yet tolerate an angry black man (even if he’s the President) – but a righteously angry old white dude can be quite loveable.

C’mon, old Joe. Put up your dukes! And knock that pretentious, puffed-up, overconfident, Ayn Rand-worshipping pup out of the ring!

2 responses to “The VP Debate: How Joe Biden can take Paul Ryan to the Woodshed.”