The Beverly Review & Our Revue

With a little more than two weeks before “The Vic & Paul Show” opens at The Beverly Arts Center in Chicago, Victoria spoke to her hometown neighborhood newspaper, The Beverly Review. 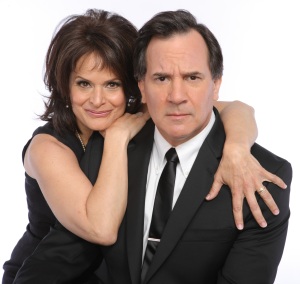 When Victoria Zielinski takes the stage at the Beverly Arts Center next month to perform with her husband Paul Barrosse in “The Vic and Paul Show,” it will be just like old times for the Beverly-born-and raised comedienne.

Although she’s lived in Los Angeles for most of her adult life, she said, she still has vivid childhood memories of ice skating at Ridge Park, eating ice cream at Rainbow Cone and spending long afternoons at the Walker branch of the Chicago Public Library.

“I don’t feel like I ever really left Beverly,” Zielinski said. “It’s in your blood.”

On top of that, she and her husband, a former “Saturday Night Live” writer, are returning to the stage to do a show together after a two-decade hiatus spent working day jobs in the television industry and raising three daughters, Maura, Emilia and Eva.

Zielinski and Barrosse met years ago while attending Northwestern University, and they went on to perform together in several comedy revues for the Practical Theatre, a Chicago- based theater company that was active throughout the 1980s.

They married in 1990, started a family and “haven’t been out of the house since,” Zielinski said.

Now that their “baby” is 16, the couple is resurrecting the creative spark that drew them together for the first time.

“Paul looked at me over Thanksgiving dinner a couple of years ago and said, ‘We’re either Vic and Paul who created comedy together, or we’re not,’” Zielinski said.

So the couple decided to pick up where they left off, creating a show that touches on the wacky world of marriage, child rearing and middle age. They spent five months creating the show at the kitchen table after work, drinking martinis and improvising just like they had done in their 20s.

“A lot of improvising occurred after 10 p.m., and it could get a little loud,” Zielinski said. “Our daughter came down the stairs a couple of times and asked, ‘Are you guys fighting?’ She got to see a part of us that she had not known.”

The show opened in Los Angeles in 2010 and played at the Mayne Stage Theater in Rogers Park in December 2011, drawing a diverse audience with its “slightly edgy” mix of music and sketch comedy laced with references to modern-day politics and tinged with a slightly vintage undertone.

“It’s almost like a tribute to [Mike] Nichols and [Elaine] May, who were a big hit on Broadway in the 1960s,” Zielinski said. “It’s an unspoken homage to that kind of comedy.”

A graduate of Kellogg Elementary School and Luther South High School, Zielinksi earned her bachelor’s, master’s and law degrees from Northwestern before devoting her career to comedy and improv. In addition to her roles in “Megafun,” “Art, Ruth & Trudy” and “Bozo Town” with the Practical Theatre, Zielinski has appeared in roles at the Goodman Theatre, the National Jewish Theatre, Court Theatre and as a member of the Willow Street Carnival, which sent her to Barcelona, Spain, to live and study with the renowned Spanish comedy troupe, Els Comediants.

The couple moved to Los Angeles in the early ’90s to further their careers as television producers, Zielinski said, but Chicago will always be home.

“In Beverly, you walk out of your house, and three people say, ‘Where are you going?’ and then give you their opinion on whatever it is you’re doing,” she said. “Here, I could be dead in my house for 20 months, and no one would notice.”

No matter whether she’s in Chicago or L.A., Zielinski is happy to be back on stage with Barrosse and celebrating the next phase of their marriage.

“We’re older and fatter than we were 20 years ago, but that’s A-OK. We’re not trying to be famous; we’ve got nothing to prove,” Zielinski said. “We think it’s cool to be empty-nesters. Paul’s my best friend, and this is our next step.”

One response to “The Beverly Review & Our Revue”