Cleveland Indians on the warpath….

I don’t want to jinx anything, but…

As of June 25, 2011, my beloved Cleveland Indians are still in first place in the American League’s Central Division — scant percentage points ahead of the Detroit Tigers.

The Tribe is 5-5 in their last ten games and Detroit is 4-6, so it’s a close race – but when the season began, who would have thought that the Cleveland Indians would even be in the race, let alone ahead?

I dearly hope my Tribe hangs on and makes it a race this season. My blue collar hometown could use a positive sports story to lift its spirits – and fill the ballpark. Cleveland is a proud Rust Belt city — and we haven’t won a World Series since legendary owner Bill Veeck and player-manager Lou Boudreau’s team took the title in 1948.

We came close a couple times in the 1990’s. Don’t get me started about the ridiculously wide strike zone that umpires gave Florida’s favorite Cuban boat-person Liván Hernández in 1997 – leading up to that weak, heartbreaking dribbler up the middle past the Tribe’s previously impervious closer, Jose Mesa.

Since 1901 the Indians have appeared in five World Series. They beat The Brooklyn Robins for their first World Championship in 1920 in a best of nine format, 5 games to 2 — allowing just two runs over the last four games. (Indian pitching posted a miniscule 0.89 ERA during the series.) 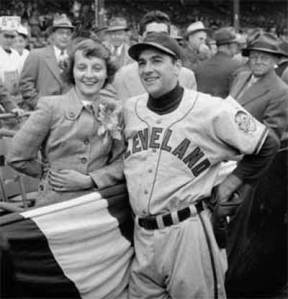 1948 player-manager Lou Boudreau and his wife.

In 1948, The Indians returned to the World Series for the first time since 1920, beating the Boston Braves in six games to capture their second championship. To this day, this is the Tribe’s greatest moment, though superstar pitcher Bob Feller failed to win his two starts. It was the first World Series to be televised on a nationwide network and was announced by famed sportscaster, Red Barber.

In 1954, The Indians set a franchise record with 111 victories to win the American League Pennant. But in the ’54 World Series, Giant’s center fielder Willie Mays ran down Tribe slugger Vic Wertz’ smash — and the Tribe was swept in four games.

The Giant's Willie Mays hauls in "The Catch" in the '54 World Series.

In 1995, The Indians won their first American League Pennant in over 40 years and advanced to the World Series to face the Atlanta Braves — who won the series in six games. The Tribe, who had batted .291 in the regular season, averaged just .179 in the Series.

This guy got the widest strike zone in World Series history.

In 1997, the Indians won their second American League Pennant in three years. They faced the Florida Marlins in the World Series. Trailing three games to two, the Indians won Game Six to force a decisive Game 7. But it was not gonna be the Tribe’s moment.

The Indians had a one run lead in the 9th inning and were on the verge of winning their first World Championship since 1948 — when the Marlins rallied to win the game in the 11th inning. Game 7 was decided in extra innings on an Edgar Rentería single up the middle past Jose Mesa: one of the great heartbreaking moments in Cleveland sports history, including The Catch, Red Right 88, The Drive, The Shot and The Fumble.

But that’s history. And history is the past. Today, the Cleveland Indians have a chance to write a surprising new chapter in Cleveland sports history. We’ve got Asdrubal Cabrera, Grady Sizeore and Travis Hafner. Screw the past.

2 responses to “Cleveland Indians on the warpath….”