Photos by Brad Hall (Except where indicated)

The Newport-to-Ensenada International Yacht Race, which runs 125 nautical miles south from the shores of one of Orange County’s wealthiest enclaves to the historic, struggling Baja port town, is billed as the world’s largest international sailing event. And while I don’t have the experience to know whether it’s truly the “largest international sailing event”, it sure is the biggest sailboat race I’ve ever been in. This was my second year racing from Newport Beach to Ensenada, Mexico with Captains George and Tom and the crack crew of Curiosity — and once again, it was the kind of adventure that inspires men (and women) to go down to the sea in ships.

The Newport-to-Ensenada race was founded in 1947 as a just-for-fun competition for sailors coming out of World War II. And as big as the race has gotten over the years, you get the sense that, for most of the racers, it’s still “just for fun”. (Though certain hyper-competitive, edge-seeking boats with their flaunting of ratings and their profusion of high-tech sails, can take the fun out of “just for fun”. But that’s just the crabby old salt in me talking.)

In the first Newport-to-Ensenada race (called at the time “The Governor’s Cup”) 117 boats paid $22.50 each to race on April 23, 1948. Winds were estimated at 25–35 knots, and only 65 boats finished the race. 62 years later, Captains Moll and Webber not only paid a lot more to enter the race – but high winds would NOT be a problem. If any sailboats failed to finish in 2010, it would be because they eventually fired up their motors in frustration.

A record 675 boats entered the race in 1983, but with the economic slump in 2009, there were only 270 entries. This year, Curiosity was among 217 boats jockeying for position among the crowd of sailboats at the start of the race. As we tacked back and forth in the light air before our 11:00 am start time, our relatively Hollywood-savvy crew was not aware that icons like Buddy Ebsen, Humphrey Bogart and Walter Cronkite had competed in the race. I simply can’t imagine the thrill of racing to the starting line against Bogie and Bacall aboard Santana.

As is our habit in recent races, we managed to get off to a good start – crossing the line among the leaders of the nine boats in our spinnaker class. I have no idea how they rate and organize all the boats into the various classes, but I do 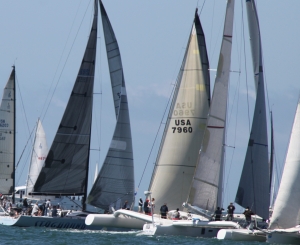 know the difference between a boat rigged for a spinnaker and one that isn’t. Thus, of the 217 vessels in the race, we were only competing against 8 of them: Elixir, Paradise Found, Tranquilo, Escapade, Zeus, Dela, Bonnie Belle and Arearea. Chief among our rivals was Elixir, whose higher rating meant that we had to give her time, but whose collection of high-tech sails gave her a distinct edge. In last year’s race, we’d kept Elixir in sight most of the race. However, with Curiosity’s rating hanging around our necks like an albatross, we’d have to finish well ahead of all the boats in our class in order to win. The whole rating thing hurts my brain.

Crewmen Michael, Wiley and Eric, early in the race, headed to Ensenada.

The winds were fair and we managed 6-8 knots of boat speed for much of the way that afternoon. In a long ocean race like this, where you’re simply racing from point A to point B, there’s not a lot for the crew to do between maneuvers – and as we were pointed on a good heading to Ensenada, and conditions were calm, we proceeded to do what sailors often do under such circumstances: drink, smoke cigars, and tell tales. Of all the joys of sailing, none surpass the camaraderie among a crew of jokers and raconteurs on the deck of a fine vessel making way on a brilliant blue sea. 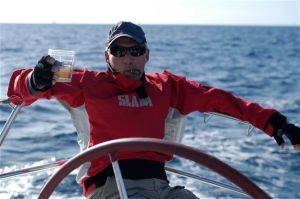 And, as late afternoon flowed into evening, our lead bowman, Claude, helped lubricate our merry maritime festivities by supplying his crewmates with a hearty ration of grog. Thanks to Claude’s knowledge of Royal Navy mixology, not a one of us would suffer scurvy on this voyage.

Claude makes his grog in the traditional way: with Pusser’s Rum, according to the English Royal Navy recipe.

I don’t think Claude actually used dark cane sugar, but he did squeeze plenty of fresh limes by hand.

Grog has been a naval staple since it was introduced into the Royal Navy in 1740 by Vice Admiral Edward Vernon (nicknamed “Old Grog” because of his grogram cloak). Grog served two purposes. Not only did it water down the sailors’ rum ration (“what do you do with a drunken sailor?”) — it also warded off scurvy by virtue of all that lime juice. If, as Winston Churchill was reported to have said, “The only traditions of the Royal Navy are rum, sodomy, and the lash” – then, after 1740, in the interest of accuracy, you’d have to replace “rum” with “grog” on that list.

Seeing (and tasting) a good thing, the Continental Navy also adopted the twice-a-day grog ration. But while the relatively- teetotaling American Navy ended the ration on September 1, 1862, the Royal Navy went on swilling watered down rum with lime juice and sugar until July 31, 1970 – when the last call of “Up Spirits” was heard in the Royal Navy. There was no last call on Curiosity that evening, as the grog and the laughter wore into the night.

The Matey in repose. (Photo by Sebastian J.)

At some point in the darkness, we crossed into Mexican waters. I was catching a few winks belowdecks at the time – until crewmate Brad Hall awakened me at 4:00 am to help perform one of the trickier evolutions on a sailboat – jibing the spinnaker. As I came up on deck, it was still dark, though illuminated by moonlight. Normally, jibing the spinnaker is a pain but, as the wind was merely a breeze, Brad and I were able to get the job done easily. It would have been much harder to wrestle that spinnaker if a stout wind was filling it.

And that lack of wind soon proved to be our undoing in this race. For most of the next 5-6 hours, we were becalmed. As much as sailors love the word “grog” — “becalmed” is a word we dread, as it means “to render motionless for lack of wind.” And that was our situation, bobbing up and down for hours on a perfectly flat (but terribly beautiful) ocean off the coast of Baja, Mexico.

Sebastian, Tom, and the Matey in the early morning calm. 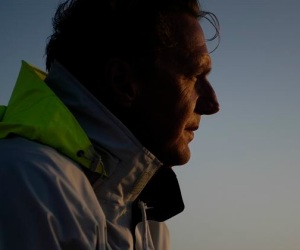 How bad is it for a sailboat to be becalmed?

Let us remember that the ancient Greek king Agamemnon sacrificed his lovely daughter Iphigenia to the gods so that his becalmed fleet would have the wind it desperately needed to sail to Troy.

Extended periods of calm made for madness and mutiny aboard sailing ships throughout the centuries. Witness this ominous passage from William Clark Russell’s seafaring adventure, “An Ocean Tragedy”… 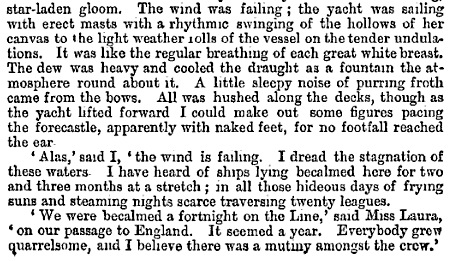 But, for the crew of Curiosity, there may have been madness, but there was no thought of mutiny. We were confident the breeze would pick up at some point during the day – though we saw a couple boats closer to shore give up, turn their motors on, and proceed under power to Ensenada. We were determined to finish the race in the right way, and our resolve was rewarded when the wind picked up late in the morning – and we saw the whales!

Claude was first to see their spouts: two grey whales (or were they humpbacks?), a mother and her calf, cruising side by side, headed north, from their breeding grounds in and around the Sea of Cortez to their northern feeding grounds in the frigid waters off Alaska. The whales were a welcome sight for our slightly exhausted and frustrated crew: a good omen for the rest of our voyage. 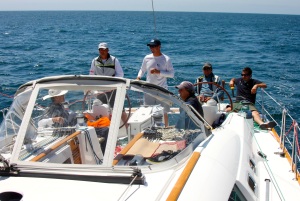 It was nearing 1:00 in the afternoon as we made our final spinnaker run to the finish line in the port of Ensenada De Todos Santos. By now, we were cracking along at 8 knots, a respectable speed, and leaving other boats in our wake. It wasn’t the screaming 12-knot final kick we enjoyed last year, but it cheered us all to bring Curiosity handsomely across the finish line. Our passage from Newport to Ensenada had taken 26 hours, but we had no clue when our 8 competitors had crossed the line.

Pulling into our assigned dock at the marina below our hotel, we noticed that our rival, Elixir, was already in her slip. Elixir had sailed further out into the ocean and caught wind when we, closer to shore, were becalmed. We made our bet, stayed inside, and the wind gods were not with us.

A final toast from the Matey. (Sebastian J)

So, there was nothing left to do but enjoy our one night in Ensenada. The hotel was in a festive mood, with mariachis playing in anticipation of a big wedding that night. Showers were taken, a few more drinks were served – and we all headed to the race headquarters to check out the results. Alas, after times were corrected, taking each boat’s rating into consideration, we finished next to last. But as we toasted Captain Moll that night over a fine dinner, we all felt like winners. It had been a fine voyage, a safe passage, and another great adventure. Here’s to many more! 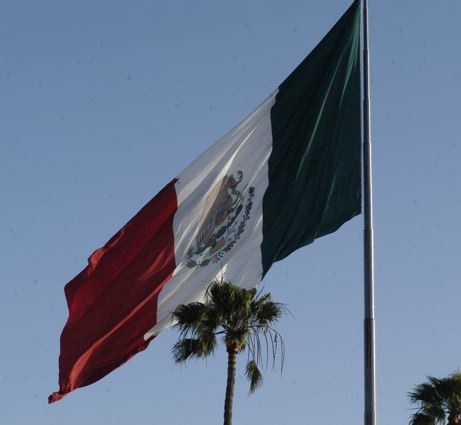