Rarely have I awakened to the news of two more miserable performances – in two totally different spheres – than I did today.

Yesterday, my hometown Cleveland Cavaliers came to Los Angeles and embarrassed themselves in an historic way. Yes, they lost LeBron James last year – but now they are in danger of losing their dignity as professional sportsmen.

The Cavs lost their 11th straight game, as the Lakers cruised to a 112-57 beat-down. It was The Lakers best defensive performance of the shot clock era, their second largest margin of victory, ever — and a new record for points allowed by the Lakers: eight fewer than their previous low of 66.

It was, in every way, a miserable performance.

“It can’t be any worse than this. If it is, someone will have to help me because I don’t know how much of this I can take,” said Cavalier Antawn Jamison. “This by far is rock-bottom. It’s definitely by far one of the most embarrassing moments that I’ve been a part of as far as basketball.”

Luckily for the Cavaliers, Sarah Palin chose today to come out of hiding (at least electronically) after the tragic shooting in Tuscon. Like Bin Laden in his cave, Sarah has sent us all a video so that we should hear her message loud and clear. 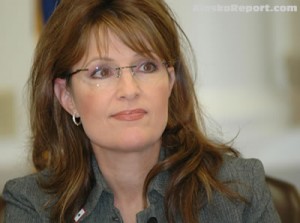 Palin’s message is shameless and entirely self-serving. Not a hint of grief. Not a moment of self-reflection. Only a crassly-constructed case for her own victimhood, including an awful reference to “blood libel,” which has even right wing commentators like Jonah Goldberg scratching their heads.

I wont bother to post her video here. You can find it easily on YouTube. You may especially enjoy the exquisite madness of her reference to how American political discourse was more polarized back in the day when there was dueling. Yes, Aaron Burr vs. Alexander Hamilton has so much to teach us about the events in Tuscon…

On the day when President Obama is scheduled to address a national memorial ceremony in Tuscon, sister Sarah’s attempt at hand-washing via video could not have come at a more inappropriate time. I doubt she understands why.

Both the Cavaliers and Sarah Palin have just turned in absolutely miserable performances.

I can forgive the Cavs.

In closing, here’s a sign that was left at the spontaneous memorial outside of the medical center in Tuscon where Rep. Giffords and other victims are being treated. In just a few symbols, it says what Sarah Palin can never allow herself to say. 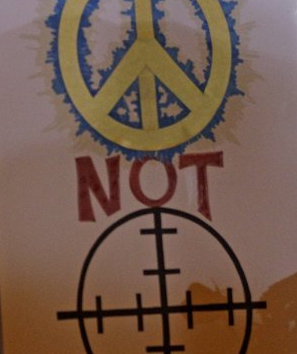